The Lord will Provide 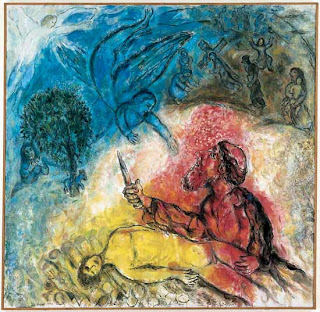 If you want to know why Abraham is regarded as a man of great faith, today’s reading from Genesis makes it clear.

Way back when God had first called Abraham, God stripped him of his past. Back when Abraham had worshipped the moon and the stars—back when Abraham was living far away in Mesopotamia—back when Abraham was just Abram, God said, “Leave. Leave your country, leave your people, leave your father’s household and go to the land I will show you.” And at the age of 75, Abraham left it all behind. His identity, his security, his status—everything he had worked so hard to achieve—Abraham released his grasp on everything and placed himself into the hands of the living God. Stripped of his past, the only thing Abraham had was a future—a future shaped by the promises of God.

In today’s reading God called Abraham again—this time to strip him of that future. At least thirty years had gone by since God called Abraham to leave his settled life and go to the land that God would show him. When Abraham was one hundred years old, God kept His promise and gave Abraham a son—Isaac. Isaac was the son on which all the promises of God hinged—the son by whom Abraham’s descendants would become as numerous as the stars in the sky—the son through whom God would one day cause His Son to be born. Isaac was the subject of decades of dreams and prayers. He was Abraham’s one slender thread of a future. But now God was asking Abraham to cut that slender thread: “Take your son, your only son Isaac, whom you love, and go to the land of Moriah, and offer him there as a burnt offering on one of the mountains of which I shall tell you.”

This was a test. This was only a test. But what a test it was. God wasn’t tempting Abraham to sin. God is not in the tempting business. God doesn’t dangle sin in front of our eyes and then dare us to disobey. That’s the work of the devil, the world, and our own sinful flesh. But God most certainly does test us. He was testing Abraham—taking his faith and putting it through the refining fire to make it better, stronger, and purer. God isn’t into breaking faith, but building faith. And this is why God tested Abraham.

But that doesn’t necessarily make this account any easier to swallow. This is a difficult passage. It raises all sorts of difficult questions—questions for which only God knows the answers. To be sure, you will never be tested by God in the way that Abraham was tested. The lesson to be learned here is not that God might one day ask you to do a terrible thing, and then stop you right at the last minute. No, we take these words of God just like all the rest. As Paul wrote to the Romans, “whatever was written in former days was written for our instruction, that through endurance and through the encouragement of the Scriptures we might have hope” (Rom. 15:4). The ultimate purpose of these words is to give you encouragement and hope. May God grant it.

There’s so much that’s so remarkable in this narrative. After God tells Abraham to sacrifice Isaac, notice that Abraham doesn’t argue—doesn’t utter a word asking God to reconsider. This from the same Abraham who pleaded relentlessly for God to spare Sodom and Gomorrah from destruction. And what’s more, Abraham sets off with Isaac very early on the very next morning. No attempts to delay or detour or drag his feet. As they approach the place of sacrifice, Isaac is called on to carry the wood—the same wood that would be used in the sacrifice of his life. It reminds me of how Isaac’s most famous Descendant (Jesus) would also one day carry the wood of His sacrifice on the way to Golgotha.

But at the heart of this narrative is a question and its answer. The question comes from Isaac: “Father, we’ve got the wood. We’ve got the fire. We’ve got the knife. But father, where’s the lamb? Where’s the lamb of sacrifice?” It was a logical question. And it must have been a terrible question for Abraham. Abraham’s answer was a loving and faith-filled answer. And it still echoes today in your heart during every terrible test that comes your way: “The Lord will provide.” Faithful father Abraham said to his one and only Son, “The Lord will provide the lamb for a burnt offering, my son.” Only it hadn’t been provided yet, and wouldn’t be provided until the last possible moment. Only after the boy was bound and the knife was raised did the angel of the Lord call out to Abraham, and put an end to that terrible test. But there would be a sacrifice—a substitute sacrifice. The Lord did indeed provide the animal for sacrifice—a ram instead of Isaac. One life in place of another life.

Abraham believed that the Lord would provide, and the Lord provided, and Abraham called the name of that place “The Lord will provide.” And if you really want to connect the gospel dots this day, then consider this: The place where all of this happened—the place where God provided a substitute sacrifice for Isaac was the same place where two thousand years later your substitute sacrifice—Jesus the Christ—was crucified. Abraham called the place “The Lord will provide,” and at that same terrible place the Lord provided for you—provided His own dear Son as the Lamb of sacrifice for your salvation. The region of Moriah would one day be developed as the city of Jerusalem. And right outside those city gates on a dark day the Lord provided His Son in your place. And this was no test.

Beloved in the Lord, God Himself has indeed provided the Lamb for sacrifice, and it turns out to be His own beloved Son. Where is the Lamb? God Himself has provided the Lamb—conceived by the Holy Spirit, born of the virgin Mary, suffered under Pontius Pilate, was crucified, died and was buried. The terrible test that Abraham faced—the possible sacrifice of his one and only son—was but a preview of the terrible deed which God would require of Himself. Isaac was spared, not sacrificed. Jesus was sacrificed, not spared. The Lord will provide. In Romans chapter eight Paul connects the dots for us: “He who did not spare His own Son but gave Him up for us all, how will He not also graciously give us all things?” If God was willing to sacrifice His one and only Son for you, how can you not believe with all your heart that the Lord will provide—come hell or high water?

And don’t think for a minute that God being all-powerful and all-knowing was somehow impervious to the pain of seeing His beloved Son suffer and die. Don’t dare assume that God the Father was immune to the loss of His Son. His loss was more than any father. His grief was greater than any parent who has ever lost a child. For God is love. And the more you love someone, the more you are vulnerable to pain. The more deeply you feel it. Therefore, the God who is love must have known the deepest pain—a Father’s pain—on Good Friday.