How Can Water Do Such Great Things? 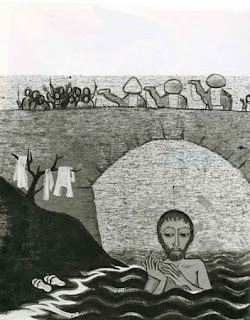 Perhaps because the Jordan River flows through the Holy Land it contains certain beneficial properties that other water doesn’t have. After all, you don’t have to read too far in your Bible before the narrative takes you down to the banks of the Jordan. Jesus Himself was baptized in that river. And if you ever travel to the Holy Land you can be sure that the Jordan River will be on your itinerary—offering plenty of places where you’ll have the opportunity to get “re-baptized” in the holiest waters of the holiest river on earth. Just make sure your pastor doesn’t find out because (I’m here to tell you) there are no do-overs when it comes to baptism. There’s no re-doing what God has already done. “One Lord, one faith, one baptism” is how Paul lays it out in Ephesians 4.

How can water do such great things? Well, let’s first of all dispel the notion that it’s the waters of the Jordan that possess all the power. Not true. Angels don’t bathe in it. It doesn’t contain run-off from heaven. In fact, from the footage and photos I’ve seen, the Milwaukee River would actually be a close cousin of the Jordan. Not too big. Kind of dirty. A little smelly and stagnant in the summer heat. It wouldn’t be the kind river I would want to wash in seven times.

But then again, I don’t have leprosy. I’m not desperate for healing like Naaman was. Naaman enjoyed power and prestige and influence as the commander of the army of Syria. But all that power and prestige was useless against his debilitating, painful disease. You can be sure that he had tried everything to halt the horrible progress of his leprosy—but it was all to no avail.

In the Bible, leprosy is always a reminder of sin. Like leprosy, our sin has no cure. Like leprosy, our sin isolates us and makes us miserable. Worst of all, it makes us unclean before God. We inherited this disease called sin. It goes all the way back to Adam. “Surely I was sinful at birth, sinful from the time my mother conceived me.” That was David’s lament in Psalm 51, and that’s our lament too—“sinful from the time my mother conceived me.” There is no cure on earth for the leprosy of sin. Only the cleansing touch of God Himself can make us clean. But it’s how God chooses to cleanse us that’s so surprising.

Naaman thought he knew how the God of Israel would cleanse him of his leprosy. His wife’s servant girl suggested that Naaman should see the prophet Elisha back in Israel. So Naaman started packing for a trip to Israel. Toothbrush, check. Clean underwear, check. 750 pounds of silver, check. 150 pounds of gold, check. (Obviously, the idea of free, nationalized health care hadn’t caught on quite yet in Israel.) Naaman naturally assumed that it would cost a small fortune to be cleansed of his leprosy.

After a few detours Naaman and his entourage finally arrived at the door of Elisha’s house. Now, Naaman was accustomed to being treated with a great deal of honor and respect. He was an important guy, after all. He figured that Elisha would come out to greet him, that they would exchange pleasantries, that he would hand over the silver and gold, that Elisha would summon the powers of his god, and Naaman would be healed—a made-to-order miracle.

But Naaman’s expectations were quickly dashed when Elisha the prophet didn’t even come to the door when Naaman knocked. In fact, Elisha and Naaman never met that day. Elisha sent a messenger to meet mighty Naaman. And before Naaman could even get his 900 pounds of precious metals unloaded, Elisha’s messenger delivered this message: “Go and wash in the Jordan seven times, and your flesh shall be restored, and you shall be clean.”

And while that may sound like good news to you, Naaman thought it preposterous and ridiculous. Seven times? In the Jordan river—that murky cousin to the Milwaukee River? Weren’t there cleaner, fresher, purer and bigger rivers that were flowing freely back home in Syria? And why seven times? You don’t get to be the chairman of the Joint Chiefs of Staff like Naaman by wasting your time with inefficient exercises like dipping yourself in dirty river water over and over again for a grand total of seven times. It was beneath Naaman to do such a thing. It made him angry to think about humbling himself like that.

Turns out Naaman had one other big objection to the whole plan: Where was the excitement? Where were the spiritual fireworks? Why didn’t Elisha come out and wave his arms and summon lightning from heaven? Naaman had been hoping to hear angels sing, to see a shaft of light descend from heaven, to have an unforgettably emotional experience—a moment he would never, ever forget. But Naaman got none of that.

Instead, all he got was the Word of God. He got nothing—nothing but a promise from God, transmitted through Elisha to some lowly messenger, and then spoken to Naaman in its truth and purity. Turns out it wasn’t the water of the Jordan river that would do such great things. It was the Word of God in and with the water that would do such great things. Naaman didn’t need his silver and gold to pay for his healing. Naaman simply needed faith to trust this Word of God in the water. For without God’s Word, that water was just plain water. But with the Word of God, that water was a life-giving water, a cleansing water, a fountain of health and healing, a sparkling spring of salvation.

Eventually the Word of God had its way with Naaman. Eventually this general humbled himself like a lowly private. He believed the Word of God, washed himself seven times, and was cleansed. And not only that, Naaman of Syria, Naaman the unclean, gentile unbeliever—that same Naaman became a child of God. For in the verse immediately following today’s reading, Naaman confesses his faith in the God of Israel.

Naaman is your name too. Naaman’s story gets replayed in your life on a regular basis. You’ve come here this morning to be healed from the leprosy of your sin. You’ve come here because you need to come here—because you’re debilitated and dying. We all need healing. We all need forgiveness. We all need our dirty, filthy hearts to be made perfectly clean. We need cleansing that no amount of silver and gold can buy. And so we come here—to where God’s messenger preaches and proclaims God’s Word. But too often we think like Naaman, “Bo-o-oring! This is boring!” We want excitement. We want emotion. We want spiritual fireworks and entertainment. But God chooses to give you what you need. God gives you what He gave Naaman—His Word delivered by His messenger. And when you believe those simple, unadorned words, you are cleansed.

In today’s Gospel reading we heard about Jesus—the Jesus who can cleanse the leprosy of your sin, and who wants to do just that! Jesus is the best friend a leper could have. That leper said to Jesus, “If you are willing, you can make me clean.” Was Jesus willing? No doubt about it. Jesus joined the leper. Jesus reached out His hand and touched that rejected, rotting man. Jesus became unclean with the leper’s uncleanness. Jesus joined the leper at his point of greatest pain and bore it with him.

You too have sin; you too have uncleanness. But Jesus comes to join you there. He bears it all for you to the cross at Calvary. Jesus was there for the leper. He is here for you too. Here Jesus reaches out to touch you and cleanse you. That cleansing began for you in the water of your baptism. How could that water do such great things? Not just the water, of course, but the Word of God combined with that water. That baptismal water worked forgiveness of sins, rescued you from the power of the devil, and gave you eternal salvation. The cleansing continues today in the preaching of this sermon, and in the meal of Jesus’ body and blood for the forgiveness of sins. It’s not spectacular or entertaining. It’s not meant to be. But what happens here in Word and Sacrament is precisely how God has chosen to heal you and cleanse you of your sin.

Through these precious means the Holy Spirit takes what Jesus accomplished on Good Friday and Easter Sunday and applies it to you personally—touches you as Jesus touched the leper. The death of Jesus becomes your death. Your sins were paid for in full. And one day your body will be raised from the grave, completely cleansed and disease-free forever.

Naaman went back to Syria cleansed and cured, and full of faith and hope in the living God. And you can have that same faith and hope as you leave here today. For the Word of God has done great things for you—in the water, in the wine, in the bread, in my voice and into your ears and heart. Jesus is able—and willing—to give you cleansing. Amen.
Posted by Pastor Michael Henrichs at 11:27 AM