Turning the Tables on Faithless Religion 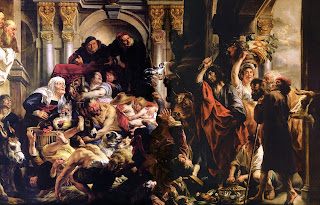 Jesus is always full of surprises. And just about the time you think you’ve got Him figured out, He manages to do the unexpected yet again. Just when Jesus starts to seem predictable, He does something totally radical.

Well, surprise, surprise! You’re in luck because today’s holy gospel presents Jesus at His most unpredictable, most radical best. This isn’t the Jesus we hear about in Sunday school who searches for lost lambs and blesses the little children. This isn’t the fun Jesus who, in the passage right before this one, miraculously makes more wine at a wedding feast. Nor is this the passive Jesus who stands quietly as soldiers surround Him and lead Him away like a lamb to the slaughter.

No, in today’s gospel reading we see in Jesus the wrath of God. Veins sticking out of His neck, a whip of cords in His hand, overturning tables, scattering coins and currency, driving people and livestock helter-skelter from the temple. This is Jesus consumed with righteous zeal for the temple—His Father’s house.

Or perhaps this is the “Occupy Wall Street” Jesus. Protester Jesus coming down hard against corporate greed. I mean, really, here’s Jesus sticking it to those who (literally) control the money—the business class. Isn’t this Jesus representing the 99% going up against the 1%? Isn’t this Jesus making sure that everyone gets treated fairly—that profits aren’t too high—that those who control the money have to play by the rules? Well, there might be some truth to that; but let’s not let today’s headlines color or distort the true meaning of God’s Word for this day.

What St. John tells us clearly is that the Passover was at hand. It was that time of year when Jews from all over the world would have been coming to Jerusalem—coming by the thousands to eat the Passover meal and to make sacrifices at the temple. Now the Law said that if you had to travel from a long distance to Jerusalem, you could buy your sacrificial animal once you arrived at Jerusalem, instead of having to drag it along all the way from home. And the money-changers were there to exchange out-of-town currency for temple currency, just to insure that some unclean gentile hadn’t put his dirty fingers on it. So during Passover week it made perfectly good sense for the money-changers and those selling livestock to set up shop right near the temple—maybe even inside the temple.

But as Jesus surveyed the scene, He saw something else. He saw His Father’s house being turned into a marketplace—a first century shopping mall where debits and credits and buying and selling had all but obscured the free gifts of grace and forgiveness which were supposed to be the main thing at the temple. The way things were going, it was probably just a matter of time before somebody opened up a Dunkin Donuts. Yeah, there probably was some price-gouging and profiteering going on. But Jesus was concerned about much more than economic injustice.

“Do not make my Father’s house a house of trade,” Jesus said. Business has its place; but its place is to be nowhere near the place where God dwells among His people to cleanse them and save them. For whenever you mix business and religion, what you end up with is faithless religion. Faithless religion is religion that’s based on the business model—religion that revolves around the idea of debits and credits, charges and payments—all in a vain attempt to pay off your sins and boost your net worth in the eyes of God. Unfortunately, the whole temple system had come to be driven by faithless religion. Pay some money. Sacrifice some dumb animal. Pay your dues and do your duty and God will bless you. Meanwhile, what really mattered to God—faith in His promises and repentance over sin—well, none of that really mattered to most people.

Faithless religion is a very easy system to adopt. Let me show you how it works: You came to church today. Some of you will come to the Lord’s Supper today. Some of you will also go to Sunday school or Bible class. Congratulations! If you do all that, then you’ve earned 50 points to put you on God’s good side. But later today you yell at a family member in anger (minus 5 points). Tomorrow at work or school you broadcast a juicy piece of gossip about one of your enemies (minus 10 points). Tuesday you spend time looking at porn on the computer (minus 15 points). Wednesday you come back to church, but you grumble so much about the inconvenience of a 6:30 service that you end up losing more points than you gain. And then on Saturday, St. Patrick’s day, you take a nosedive into the red by indulging in way too much green beer. So of course you head back to church next Sunday to get out of the red and into the black. It’s religion without the faith—faithless religion. And it is a damnable lie.

We look back at those Old Testament types and chuckle to think that they thought they could butter God up with a sheep or a few doves. But meanwhile, we adopt the same strategy, thinking that sitting in the pew and tossing a check in the offering plate will more than offset whatever sinful indulgences we might partake of in the upcoming week. It’s faithless religion, and its adherents are destined for hell.

We first of all need to understand the sacrificial system of the Old Testament. Those animal sacrifices were commanded by God. Their purpose was not to butter God up, but to teach His sinful people how to live based on the death of another. The blood of the animal corresponded to your life. It was bad news for the lamb, but good news for you. That system taught people to live by faith in the promises of God, and not by their own works. Yes, you brought your sheep to the temple and had it sacrificed. But the gift of forgiveness and life was something God GAVE away for free. It was more a gift FROM God than a work you did FOR God. Don’t think for a second that God saved people through “works” in the Old Testament and “by grace” in the New Testament. God has always—from day one—operated with His people by grace, through faith, for the sake of His dear Son.

And it’s that Son, Jesus, to whom the entire sacrificial system was pointing. Jesus is the Lamb of God. And by His once-for-all sacrifice, He has taken away the sins of the world. The only economic transaction that matters to God is the transaction that took place through the body of His Son on the cross. In that Good Friday transaction, all our debts—all of our scarlet sins that would otherwise put us eternally in the red—all of that sinful debt was charged to Jesus. All of YOUR sin was put on HIS tab. And all of that deadly debt was paid off in full by the perfect life and sacrificial death of Jesus. And wonder of wonders, through faith in Jesus, you get His perfect record as your own. He takes your loss; you get His profit. Your debt is paid in full. Your sin is atoned for. And the cost to you is not one red cent. It’s all by grace, through faith, for Jesus’ sake.

Faithless religion not only leads to hell, but it’s a selfish life that leaves you constantly weary and burdened. You’ve always got to keep score. You’ve always got to balance the books to make sure you’re in the black—that you’re good enough. So leave faithless religion behind. Come to Jesus. His body is now the new temple of God. It’s in Jesus that God now dwells to save us. On Good Friday they destroyed that body with nails and thorns on a Roman tool of torture. But on the third day that body was raised, and is alive forevermore. He was crucified for your sins and raised again for your justification.

Yes, Jesus is full of surprises. Turns out, that quip He made about destroying the temple and raising it again in three days was a reference to Himself—to His own body—now raised and glorified. Later on, His disciples remembered what He said, and they believed the Scripture. You too, can do no better this morning than to remember Jesus’ Words and take them to heart. “Come to Me,” He says, “and I will give you rest.” “Drink of it, all of you, this cup is the New Testament in my blood, which is shed for you for the forgiveness of sins.” Taking these words to heart is the opposite of faithless religion. It’s the essence of what it means to have faith in Jesus.

This house is no house of trade. It’s God’s house—a place where you are welcomed by God, loved by Him, and served with His gifts of forgiveness and life that lasts forever. Amen.
Posted by Pastor Michael Henrichs at 7:26 AM