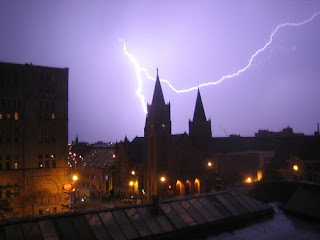 You’re not fooling anyone, you know. I know what’s on your mind this morning . . . and it isn’t the account of Jesus sending out the seventy-two to proclaim the kingdom of God. After all, it’s the Fourth of July in Whitefish Bay. Just a few hours from now—and just a few blocks from here—you get a parade, followed by good food, good music, fun and games, and last but not least—fireworks. For many of us this day will conclude with our eyes trained upward to the heavens. Up in the sky we will see and hear dazzling explosions. Bold bursts of color and light will fill the skies, fade, and fall back to earth again.

What was it that caused Jesus to see such a spectacular sight? It was the accomplished mission of the seventy-two whom Jesus had sent out. These 72 did not include the 12 apostles. Their number (72) corresponded to the 72 nations listed in the book of Genesis after the flood. Sending seventy-two was a symbolic way to show how the church—from the very beginning—was concerned with making disciples of all nations. Their mission was relatively simple: They were to proclaim the peace of Jesus. They were to heal the sick. Even the demons submitted to the seventy-two. And when the 72 returned, Jesus famously congratulated them saying, “I saw Satan fall like lightning from heaven.”

How did these 72 men manage to accomplish such an astounding feat? It wasn’t because they were gifted public speakers, trained in the art of persuasion. It wasn’t because they had taken classes on evangelism and demonology. It was because Jesus Himself had sent them out with His own power and authority. Jesus told them straight-up, “whoever listens to you listens to me; he who rejects you rejects me.” These men went out “in the stead and by the command of their Lord Jesus Christ.” It was the authority of Jesus, vested in them, that caused Satan to “fall like lightning from heaven.”

These men were, in a sense, precursors to pastors. Proto-pastors. Men called and sent by Jesus . . . to preach Jesus. The sending of the 72 is really, at its heart, a lesson about pastors—and about the great authority Jesus gives to pastors. You catch a glimpse of that authority most Sundays when the pastor says something like, “As a called and ordained servant of Christ, and by His authority, I forgive you all your sins.” This is what Jesus had in mind when He told the 72, “Whoever hears you . . . hears Me.” It may be the pastor who vocalizes the forgiveness of your sins, but in hearing the pastor you are hearing Jesus. As it says in the catechism, absolution comes “from the pastor as from God Himself.” And you, for your part, should not doubt, but firmly believe that by that absolution your sins are forgiven before God in heaven.

Your pastor has the power and authority of Jesus . . . (not all the time—not when he’s mowing the lawn—not when he’s walking around the house in his jammies, but) when he’s doing and speaking the things that Jesus has given him to do and speak. When he forgives your sins, when he preaches and proclaims the Word of God, when He feeds you with the body and blood of Jesus, when he washes you in holy baptism—whenever and wherever pastors are doing these things the kingdom of Satan is being rolled back. Jesus saw it going on in the mission of the 72. And it’s still going on today. We may not see it, but Jesus does. It’s as bright and explosive as tonight’s fireworks, even though it might not seem that way to our eyes and ears. But Jesus calls it like He sees it: “I saw Satan fall like lightning from heaven.”

What do you think about that fact—that through the work of pastors Satan himself is being beaten back? I don’t often preach about this because it sounds like I’m tooting my own horn; but I’m really sounding the horn of Jesus. He’s the one who calls pastors. He’s the one who sends pastors. He’s the One who puts power and authority in their words. “Whoever hears you hears me,” He says. “And he who rejects you rejects me.”

To be honest, both lay people and pastors have problems with this truth about pastors. Too often people don’t respect the authority of the pastor. They don’t see their pastor as a gift sent from God. Or they expect the pastor to be something that God hasn’t called him to be—like an expert in marketing technique, or a fund-raiser, or merely a motivational speaker. Unfortunately, pastors too often confuse the matter by acting like . . . well, by acting like marketing gurus, fund-raisers and motivational speakers. They see their job as to be in charge and tell people what to do, rather than to apply the Word of God to sinners. Some pastors see their congregations as their own little kingdoms, rather than seeing them as part of the kingdom of God, and themselves as simply shepherds and spokesmen in the stead of Jesus.

Beloved in the Lord, we need to see it the way Jesus sees it. Pastors who preach Christ and proclaim the forgiveness of sins are a part of God’s plan. And going all the way back to the sending of the 72, this plan has prevailed. It has worked. What happens between pulpit and pew matters. It matters eternally.

Fireworks on the Fourth of July are exciting. But as you look skyward tonight, remember this: Satan is falling fast—like lightning—because of what goes on here every week. But Jesus also reminds us that the big thing—what is truly cause for rejoicing—is that your names are written in heaven—written in the Lamb’s book of life. That is why God sent His Son into the world. This is why God has sent me to be your pastor—to tell you with certainty and with conviction that the kingdom of God includes you—that the peace and life of Jesus Christ are yours—that your name is written in heaven. Don’t doubt it; but firmly believe it. Your sins are forgiven before God in heaven. Happy Independence Day! Amen.
Posted by Pastor Michael Henrichs at 7:17 AM