M is for Mary--and Much, Much More 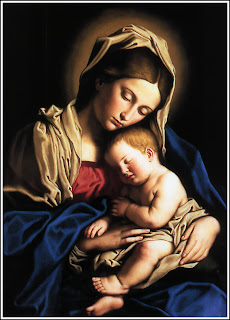 Gathered here on a warm day in August, it seems a little strange to be talking about Mary, the mother of Jesus. We’re much more accustomed to hearing about Mary on cold, gray mornings in December—as we light candles on the Advent wreath and snow flurries fall from the sky. What were those Christians thinking centuries ago when they chose August 15th as a special day to thank God for Mary? Maybe their calendars were off. Maybe they wanted a taste of Christmas in August. Or maybe they knew that we can’t talk about Mary without talking about faith. After all, that’s mostly why we remember Mary—for the fact that she believed the outrageous promises of God. And faith-talk—words that build and strengthen our faith—well, that’s the kind of thing we need to hear during every month of the year, August included.

Here's a bit of trivia for you: If you were to travel to the Holy Land—and if you were to seek out the largest Christian Church, you wouldn’t find it in Jerusalem. Nor would you find it in Bethlehem. No, the largest Christian church in the Holy Land is located in Nazareth. It’s called the Basilica of the Annunciation. Some of you have probably been there. It was built in the 1960s, constructed right on top of the traditional site of the annunciation—where the angel Gabriel announced to Mary that she would be the mother of God’s Son.

The M of Mary also stands for “mystery.” There’s much mystery about Mary. The gospel-writers tell us almost nothing about her. We know nothing of her life story up until that day when God sent the angel Gabriel to Nazareth, “to a virgin pledged to be married to a man named Joseph.” And that’s it! We don’t know what she looked like, whether she was rich or poor, or whether she was in her teens or twenties. We just don’t know. The Bible doesn’t tell us. As far as Mary’s life is concerned, there’s a lot of mystery.

Some Christians aren’t comfortable with that amount of mystery, and so they try to fill in some details about Mary’s life. In fact, if you were to head down the street to St. Monica’s or to Holy Family today, you would discover that Roman Catholics today are celebrating the Assumption of Mary into heaven—the belief that at the end of her earthly life Mary was assumed, body and soul, into heaven. The only problem with that is that the Bible tells us nothing of the sort. The end of Mary’s earthly life is just as much a mystery as its beginning.

I believe there’s a reason for all the mystery about Mary—that the Holy Spirit knew what He was doing by withholding all the details about Mary. Here’s why: If the Bible told us that Mary was very smart, we might be tempted to conclude that God chose her for her intelligence. If the Bible told us she was poor, some might conclude that God chose her because of her poverty. Or if the Bible said that Mary was beautiful, some might think that God chose her because of her appearance. In other words, we’d always be tempted to think that Mary somehow earned or deserved to be God’s special pick. But I’m here to tell you that the M in Mary does not stand for “merit.”

No, Mary’s life is a mystery because it forces us to see that God makes His choices, not based on merit, but on grace. Mary neither earned nor deserved to be the mother of God’s Son, but that special role was given to her, all by God’s grace. And the very same thing holds true for you and for every child of God. God has chosen you to be His own—not because of who you are, but because of who He is—because He is a God of grace and mercy, who always chooses the least and the lowly and the unlikely. He chose you and gave you the gift of faith in His Son—not because there’s any merit or worthiness in you—but because of His fatherly divine goodness and mercy. All generations call Mary “blessed,” not because of what she did—but because of what God did for her and through her. And in the same way, you too are blessed. M is for Mary. M is for mystery . . . and more.

M is also for “memory.” How good is your memory? Is it like a steel trap or more like a sieve? The ironic thing about the human memory is that we always seem to forget the things we want to remember, and we always seem to remember the things we’d like to forget. Anniversaries, passwords, and locker combinations need to be remembered, but we often forget them. But the embarrassing, sinful and hurtful things we’d like to forget about—the memory of these things lingers long for many of us.

The M of Mary is also for “memory.” Part of Mary’s song we heard today has to do with memory—with God’s memory to be precise. Mary sang in her Magnificat about the Lord: “He has helped His servant Israel, remembering to be merciful to Abraham and his descendants forever, even as He said to our fathers.” What that means is that God remembers His promises. When God promised Adam and Eve that the woman’s offspring would crush the head of Satan, God didn’t forget. When God promised an old man named Abraham that he would have a son—that his descendants would be as numerous as the stars in the sky—God didn’t forget. When God promised David that one of his descendants would rule and reign over an eternal kingdom, God didn’t forget. And when God promised you in the waters of Holy Baptism that He would never leave you or forsake you, He hasn’t forgotten that promise and He never will. And the proof of God’s great memory is found in Mary’s Son, Jesus the Christ.

In Jesus, God remembered all His promises—not only the promises to Abraham, Isaac and Jacob—but also to you. For in Jesus God was reconciling the world to Himself, not counting your sins against you. In Jesus, God has adopted you as His own dear child. In Jesus, God has destroyed death and brought life and immortality to light through the Gospel. In Jesus, your sin and shame was nailed to the cross. Your ugliest deeds and your most regrettable words—your trail of lies and broken promises—all the awful things you wish you could forget—in the blood of Jesus they are washed away, atoned for, forgiven. Because of Jesus, your God says to you, “I will forgive your wickedness . . . and I will remember your sins no more” (Jer. 31:34). M is for memory—for God’s memory. He remembers His promises and His mercy. But your sins He remembers no more.

M is for Mary, for mystery, for memory, and more! M is also for “magnify.” Mary sang, “My soul magnifies the Lord and my spirit rejoices in God my Savior.” When you magnify something, your perception of it gets bigger. When you use a magnifying glass for reading, the letters on the page don’t actually change size; but what changes is your perception of the letters—they’re larger, bolder, magnified.

We so often magnify the wrong things in life—the sins of somebody else, the flaws and failures of others. It’s easy, too, for me to magnify my own suffering, my own troubles and disappointments. We’re naturals when it comes to magnifying all the unfairness of life and all the crosses that we bear.

But rather than make those things loom larger, Mary invites you and me and all who follow her Son in faith to magnify the Lord—to let His promises fill our ears and hearts—to let His grace and mercy be at the center of our lives. Mary’s song—the Magnificat we heard today—takes up eleven verses in Luke chapter one. And in those eleven verses, Mary refers to the Lord’s deeds and actions no less than eleven times. Mary doesn’t sing about herself. She didn’t magnify all the fear and uncertainty that must have swirled around her after hearing the angel’s message. Instead, she magnifies the promises God has kept, the mighty deeds He has done, the mercy He has always shown.

Beloved in the Lord, let’s magnify with Mary. After all, those promises and those mighty deeds and that mercy are for you, as well. In Mary’s Son, God has made you His own child. And now neither life nor death can separate you from His love. M is for Mary—and so much more. On this day we thank God for the mother of our Lord Jesus. Through Him, the mighty one has done great things for you, so that you too can magnify the Lord and rejoice in God your Savior. Amen.
Posted by Pastor Michael Henrichs at 7:30 AM