Apostle of the Also-Rans 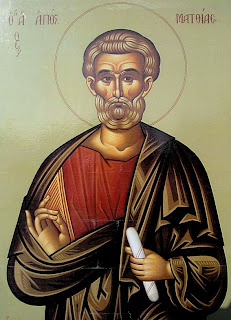 It was a pivotal moment in time for the very first Christians. The Lord Jesus had ascended into heaven, but the day of Pentecost had not yet arrived. It was a span of ten days during which the 120 or so believers had been told by the Lord to wait—to wait for the coming of the Holy Spirit. Baptizing, preaching, breaking of the bread—these gifts of God would get underway in earnest starting on Pentecost. But it wasn’t yet Pentecost. How would the believers bide their time as they waited?

In Acts chapter one we learn exactly what transpired. We learn that the eleven apostles were there. We learn that it’s eleven—and not twelve—because Judas had departed this life. We also learn that Mary the mother of Jesus was there. This, incidentally, is the last time we hear of Mary in the Scriptures. It’s worth noting that Mary isn’t calling the shots here. She isn’t being worshipped. Nor is she performing any miracles. It leads me to suspect that if Mary were here today, she’d likely be sitting where you are (not standing here where I am)—receiving the gifts of her Son, just as you are.

It seems that there was one very important item of business that needed to be addressed before the arrival Pentecost. They needed to replace Judas. A successor needed to be named. But you have to wonder, “Why?” Are twelve apostles that much better than eleven apostles? Was the workload so great that eleven simply wouldn’t be enough to get the job done? Was it just a matter of keeping with the tradition of twelve? No, not at all. The need for a replacement was spelled out in the Scriptures. Peter drew from the Psalms to explain why it was necessary to have a call meeting.

Or to express it with a double negative: The Lord is simply not going to not have Himself a twelve. It began with the twelve sons of Jacob in Genesis, who evolved into the twelve tribes of Israel. It continued with twelve apostles in the New Testament. And it will continue in heaven where the population there is symbolized by the number 144,000—or 12 times 12 times 10 times 10 times 10. The Lord is not ever not going to not have Himself a twelve. (That’s a triple negative by the way.)

And so the very first call meeting of the very first Christian congregation takes place. Two names are proposed: a fellow named Joseph and a fellow named Matthias. They prayed. They cast lots (which is a little bit like rolling the dice), and the lot fell to Matthias; and Matthias became apostle number 12. And we never hear one thing more about Matthias ever again.

It’s tempting to conclude from all this that you can’t be much more of an “also-ran” than St. Matthias. “Also-ran” is a horse-racing term; it means that you’re finishing in the middle of the pack—as in, “That horse was just an also-ran.” Also from the world of sports come terms like “bench-warmer” or “minor-leaguer.” It is tempting to place Matthias in one of these categories. After all, he does join the roster very late in the season. We get no sermons from Matthias, no miracles, not even an acceptance speech. As new congregations have formed over the centuries, you can be sure that only a small fraction chose to name themselves after St. Matthias (as in St. Matthias Lutheran Church).

Despite all that, I hear good news in the story of St. Matthias. He may indeed be an also-ran. But then again, so are we! Matthias demonstrates clearly that the history the church of Jesus Christ is a history of addition—a history of adding to, and not subtracting from. Twelve minus one was no good. But eleven plus one was perfect—a perfect twelve. And you are a part of that twelve. You are one of millions of also-rans—ransomed souls called to faith and redeemed by Christ the crucified. To some it may seem insignificant and unimportant that God called Matthias to get His twelve. But it was clearly important to Jesus—important enough that the Holy Spirit inspired St. Luke to write down exactly what happened at that pivotal moment between Ascension and Pentecost. Our Lord is into adding, and Matthias reminds us that you have been added by Jesus, called to receive the forgiveness and life of Jesus.

If not for this forgiveness things would be far different. If our Lord kept track of every misdeed, of every shameful act, of every hateful word, then the story of the church would be far different. Then it would be a story of subtraction—a story of minus one, and minus another and another and another—a story of the subtraction of sinners. If God judged us according to our deeds, we could not stand before Him. To each of us the verdict would be “not good enough.” And our sentence would be eternal death. There would be no room for us in the church, and no church at all. Because one by one we would surely be whittled away and pared down—subtracted because of our sins.

But your God won’t stand for that. He’s not going to not have His twelve. He’s not going to not have His one holy Christian and “apostolic” church. He’s going to add you and keep you in His eternal care. And He does it through His Son, Jesus Christ. All of our shameful sins and guilt—that awful load that should rightly subtract us from the ranks of the redeemed—all of that wickedness was laid upon Jesus. Do the math! Take the whole rotten load of your sin and then multiply it by every person that has ever lived, and you begin to see the enormity of the burden that Jesus carried in His crucified body. Jesus Himself was subtracted and forsaken by God. He suffered hell as He hung derelict and damned on the cross.

But God raised Jesus from the dead. The Father accepted His sacrifice on your behalf. Jesus is the firstfruits of those who have fallen asleep. That means that His resurrection is the first of many resurrections. To the resurrection of Jesus will be added millions and millions of resurrections, including your own! Our Lord will have His twelve, His new Israel, His holy church—those who have washed their robes in the blood of the Lamb. And you are a part of that glorious twelve.

Matthias teaches us that the Lord is into addition, not subtraction. And Matthias also teaches us how God quietly and secretly uses ordinary people—also-rans and back benchers, and bench-warmers—to do what needs to be done in this world. On the Day of Pentecost you can be sure that Matthias was right there with the rest—a tongue of fire resting on him, preaching the good news of Jesus in a language he’d never spoken before, baptizing a share of the three thousand who were baptized that day. Matthias did great things that we never hear of. He never had the headlines like Peter or Paul or Luther. He just quietly did what God had called him to do, and we never hear of him again.

So it is with you and me. Through water and the Word, God has called you and set you to work in this world. He’s put you in this place and in this pivotal time to work on His behalf for the life of the whole world. There’s work to be done in this congregation, and the Lord is counting on you to do it. There’s work to be done in your home and family, and you’re just the man/woman/child for the job. Your neighbors and co-workers have needs too. And don’t forget your nation and neighborhood. God has given you responsibilities in that realm too. These are your vocations, and they aren’t easy. And you’ll probably never make the headlines or the history books for all the faithful work you do. Why, even Matthias achieved more notoriety than you or I ever will.

But our Lord loves and uses also-rans like us to accomplish great things. Your labor in the Lord is not in vain. Matthias teaches us that we can be sure and certain of that. When you do the simple things you have been called to do, the angels rejoice.

Through you—through your witness and work—the Lord is determined to continue adding to His church, ceaselessly striving to get His perfect twelve. The book of Revelation gives us a glimpse ahead:

Then I looked, and there before me was the Lamb, standing on Mount Zion, and with him 144,000 who had his name and his father’s name written on their foreheads . . . .and they sang a new song. . . . No one could learn the song except the 144,000 who had been redeemed from the earth. . . . They follow the Lamb wherever He goes. They were purchased from among men and offered as firstfruits to God and the Lamb. . . . and they are blameless.

Those words are all about you, by the way. In that preview of heaven you are described as purchased, redeemed, and blameless through faith in Jesus Christ. You and I will be there, following the Lamb, along with Matthias. Don’t forget St. Matthias. He’ll be there too. The Lord added Matthias to the eleven and got His perfect twelve. And the Lord has added you too—also-rans, back-benchers, middle of the pack, and the stragglers too. Jesus comes to seek and save them all—including you. For Jesus is simply not going to not have Himself a twelve. Amen.
Posted by Pastor Michael Henrichs at 9:42 AM