Borrowed by the Lord

When the season of Epiphany begins next month, it’s entirely possible that it might escape your notice. And, also, when season of Lent gets underway in mid-February, you might miss it. Sometimes we can be oblivious to the changing seasons of the church year. It happens. But Advent escapes nobody’s notice. No one can claim to be clueless as to the arrival of Advent. There’s an oversized wreath with candles dangling in the front corner! You can’t help but see it—and smell it—along with all the other greenery that graces the nave.

But in addition to the seeing and the smelling . . . what matters most in Advent is the hearing. And what we hear in Advent has everything to do with the coming of the Christ. Christ came in humility as the babe of Bethlehem and the Son of Mary. He comes among us today—here and now—in the means of grace. And He will come again with glory to judge both the living and the dead. Advent is one complex season—so much more than just a countdown to Christmas.

Advent always accents the coming of the Christ. This is why the Triumphal Entry of Jesus into Jerusalem always sets the table for 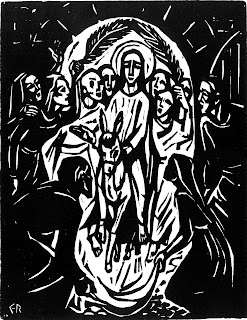 us on the First Sunday of Advent. Jesus comes into Jerusalem in humility, riding a borrowed donkey. He comes to die—to bow His sacred head in submission to the Father—to bear the sins of the world on His crucifixion cross.

Did you notice the Lord’s mode of transportation? That donkey would seem to be kind of important as Saint Mark tells of the Triumphal Entry. It was a borrowed donkey—a never-before-ridden donkey. And did you notice just how that donkey was acquired? Jesus told two disciples to seek it, find it, and take it. It would be as if Jesus told you to wander through the parking lot at Bayshore and look for a nice, new 2018 model with the keys in the ignition—and take it. And if anyone should ask just what you’re up to, just say, well, “The Lord has need of it.” (I don’t recommend trying that.)

These details about the donkey don’t make a lot of sense to us. We wouldn’t have scripted things out like that. But that’s how the Savior scripted it. Those are the orders He gave. And amazingly, that donkey was acquired in just the way Jesus had directed. At the very least, this is a gentle reminder to us that the all-knowing Lord is also at work in the strangely scripted details of our lives—that He has a plan and purpose for His people which isn’t always pretty and neat (like the packages that will soon start piling up beneath your Christmas tree.)

It’s also worth noting that when Jesus gave those two disciples marching orders on just how to borrow that beast of burden, they went and did exactly what the Savior said. They may have had their doubts about the mission. There was certainly some risk involved. But they trusted Jesus and kept His Word. That’s also what you’ve been called to do—to trust Jesus and keep His Word—to do what He says even when you’d rather not—even when you have doubts about the outcome—even when others may laugh at you and mock you—even when there’s some risk involved.

What it all comes down to is a beggar king on a borrowed donkey. Back in the day, King David had always been partial to the steady, stable, dependable ride of a donkey. The pro-Jesus folks in that Palm Sunday crowd picked up on that little tribute to David and started calling out to the Christ with kingly kinds of language: Hosanna! Lord, save us! Blessed is He who comes in the name of the Lord! Hosanna in the highest! That crowd had a plan for Jesus—a plan to run the Romans out of town, to reestablish the throne of David, and to revive the glory of Israel.

But that borrowed donkey reminds us that Jesus had other plans—not for an earthly kingdom but an eternal one. He was riding into Jerusalem to suffer and die and rise again—to conquer sin and death for the whole world—including you. This King would be crowned with thorns, not gold. His throne would be a cross. His victory would come through submission and suffering and death—for you and every sinner.

Those are the facts of history. That’s exactly what happened at Christ’s first coming—His first advent—which began in Bethlehem and concluded at His ascension to the Father’s right hand. But today His advent continues. The Risen Lord continues to come among His people. No, He doesn’t come here today atop a borrowed donkey (although that would be kind of fun). But He does come here to serve you and love you in ways that are no less humble and hidden.

The same Jesus who borrowed a donkey because He had need of it—well, Jesus is still in the borrowing business. He borrows our language to speak to us—to crush us with His commandments and to forgive us with the power of His promises. He borrows our water and adds His Word, and makes it a baptism—a cleansing splash for you that works forgiveness of sins, rescues from death and the devil, and gives eternal salvation. He borrows our bread and our wine and then comes to save us in the meal of His body and His blood. The same Christ who rode into Jerusalem also comes among us in His Holy Supper. This Jesus has also borrowed our humanity—permanently. He is bone of your bone and flesh of your flesh, tempted in every way just as you are, yet without sin. He became one of us to save all of us.

And so that this salvation can be delivered into your ears and your mouth and your heart, the Lord Jesus has borrowed a man named John to be His minister. And through this congregation the Lord has called John Wohlrabe to serve you with His Word and sacraments. The Lord has borrowed John—ordained him and called him to serve as a shepherd of this little flock. Now, it’s obvious to us why the Lord would want to borrow for His holy purposes a man like Pastor Wohlrabe—a man who can battle with church bureaucrats, and huddle with historians, and teach twenty-somethings at Concordia, and sail serenely through the challenging waters of Lake Michigan (not to mention he’s married to Julie.) There’s a lot to like and admire about this man.

But perhaps it’s simply sufficient to say that he’s been borrowed by the Lord. The Lord has need of him. Like that lowly donkey, Pastor Wohlrabe will bear the Lord Jesus Christ into our midst—by the words He preaches, by the sins he absolves—through teaching and catechesis and visitation He comes among us bearing the Christ, our Savior. His ministry is always an Advent ministry—for through his lips and in his hands the Lord Himself comes to serve His holy people.

We pastors wear stoles and vestments as a reminder that we are borrowed men—called and sent by the Lord—preaching not ourselves, but Jesus Christ as Lord. Those vestments are a necessary reminder because we aren’t so different from you. We are frail and flawed sinners—with egos and ambitions and quirks that need to be reined-in constantly. The vestments help cover up that mess so that we can magnify Christ—so that He might increase and we might decrease. All that remains uncovered among those men borrowed by the Lord are lips to preach His holy name and a finger to point you to Jesus, who loved you and gave Himself for you.

The Christ who comes among us today is visible only to the eyes of faith. And just like His coming to Jerusalem on that Palm Sunday, so today He comes in ways that are humble and rejectable. Jesus doesn’t force His gifts on anyone. It is within your power to reject those gifts—to close your ears to His holy Word, and shut your mouth to His Holy Supper. You can live as if you are not a baptized child of God. And your Old Adam pushes, pulls and drags you in these directions ceaselessly. As John the Baptist will remind us next week, repent. Return to the Lord. Confess your sins and receive absolution from the pastor as from God Himself, not doubting but firmly believing that by it your sins are forgiven before God in heaven.

That forgiveness is why Jesus came in history. It’s why He comes today—to cover your sin with His blood-bought righteousness and innocence. He comes to set you free from captivity to sin and death so that sin will no longer be the boss of you, and so that you can know for sure that your destiny is not destruction, but resurrection. Jesus comes to show you God’s mercy and kindness so that you won’t be afraid to die, and so that you won’t be afraid to live.

Christ has come. Christ comes today. Christ will come again! Happy Advent.
In the name of the Father and of the Son and of the Holy Spirit. Amen.

Posted by Pastor Michael Henrichs at 8:00 AM