Well, we’ve finally made it to the grand finale—the Last Sunday of the Church Year. Next Sunday (should Jesus not return in the meantime) we’ll be lighting candle number one on the Advent wreath, the sure sign that a new church year has begun. So, in effect, today is something like the church’s version of New Year’s Eve. But unlike the parties and revelry that accompany the end of the calendar year, the end of the church year is an occasion for solemn sobriety.

And few sections of Scripture sober us up more quickly than the words of Jesus in today’s Holy Gospel. The account of the sheep and goats is not a parable in the usual sense. It’s really not an earthly story with a heavenly meaning. It’s a vision of the Last Day and the Final Judgment. [Christ] will come again to judge both the living and the dead. And today Jesus gives us the cold, hard facts about that judgment. But prepare to be surprised as we dive into these words for a deeper look. For these words tell us as much 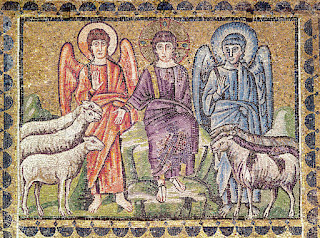 about this day as they do about the Last Day.

In the same way, it’s not always easy to distinguish between believers and unbelievers in the world today. Just to walk around Bayshore Town Center, you really can’t tell by looking who has faith in Christ and who doesn’t. Believers don’t get any preferential treatment in this world. If you’re coming to church because you believe it guarantees a certain degree of success in this world, or because it will give you a leg up on the competition, think again. Bad things happen to good people. Good things happen to bad people. But, some people believe in their hearts and confess with their lips, “Jesus Christ is Lord.” And that will make all the difference—the difference between heaven and hell—between eternal life and eternal punishment.

Only at the end of the day—only as night begins to fall—will a distinction be made between sheep and goats, between believers and unbelievers. Sheep to the right; goats to the left. And, for the love of God, please carefully note the terms of this separation: They are sorted on the basis of what they are, not what they have done. It’s not like a separation of those who only sinned a little and those who really sinned a lot. It is separating one thing from an altogether different thing—sheep and goat, believer and unbeliever. You will be judged not on the basis of what you did, but on the basis of who you are. It is by grace you have been saved, through faith. And this not of yourselves; it is the gift of God, not by works so that no one can boast. The sheep are saved by grace, through faith in Jesus. The goats are condemned; because they lack faith in Jesus.

To the sheep the King will say, Come, you who are blessed by my Father, inherit the kingdom prepared for you from the foundation of the world. The believers are blessed with a kingdom that was theirs from before time began. Before these sheep even had the chance to do one good deed (or one bad deed, for that matter), this kingdom had been prepared for them. And the sheep receive it, not as wages earned, but as an inheritance. You don’t earn an inheritance; you can only receive it as a gift from someone who died.

The timing of all this is terribly important. Notice that there’s been a sorting and a separation—a kingdom has been given and received—but still not yet a single word has been breathed about works. Their works didn’t save the sheep. The righteous didn’t earn their righteousness. But wow, were those sheep busy! I was hungry and you gave me food. I was thirsty and you gave me drink. I was a stranger and you welcomed me—naked and you clothed me. I was sick and you cared for me—in prison you came to visit me. Your good works don’t save you either. But do your good works matter? Will they be taken note of? Do they have eternal significance? Does what you do for the least and the lowly of this world matter at all? Let there be no mistake: the answer is yes, yes, and yes.

Why do your good works have such tremendous value? Here comes the surprise of all surprises. Notice how the sheep are puzzled after hearing about all the good works they did. But listen carefully. They don’t ask, “When did we do these things?” They knew they had done those things. But what they do ask is this: “Lord, when did we see You hungry? When did we see You thirsty, a stranger, sick or in prison?” And then comes one of the most amazing sentences the Savior ever spoke: “Truly I say to you, as you did it to one of the least of these my brothers, you did it to me.”

Who would have guessed it? Jesus has hidden Himself in the sick, the poor and needy. Christ has concealed Himself in the hungry, the thirsty, the stranger. In the one who is sick or in prison, there is the covert Christ. The Savior has secretly hidden Himself in those around you—in your family members, in your brothers and sisters in Christ—there is Jesus! And whatsoever you do for the least of these, you do for Jesus.

Beloved in the Lord, Jesus has let the cat out of the bag and things can never be the same again! This mysterious sentence changes everything! Luther hit the nail on the head when He preached on these words: Thus the world is full of God. In every yard, in every lane you may find Christ. . . . Do you wish to serve God? You have Him in your home, with your children. . . . Go and comfort your sad and sick neighbors. Help them with all your possessions, wisdom and skill (Day by Day, p.325). Why bother? Because there, in them, is the covert Christ.

It sounds easy, right? But here’s the rub: It’s a lot easier to see the devil in those around us than it is to see the Jesus in them. Because the people around us, well, they aren’t perfect, like Jesus. They aren’t very Christ-like. You can look long and hard at some folks, and see no trace of the Savior. He’s really good at hiding Himself in some people. And quite frankly, when it comes to some of the people some of the time, we’d simply rather not see the Jesus in them—because then we can ignore them, tune them out, declare them to be somebody else's problem, or worse. But Jesus says, “I am there. Whatever you do for them—for the least—you do it to me.” Do you believe it? And if you do believe it, how will your life be any different between now and the day of judgment?

Beloved in the Lord, your ability to see the Jesus in me or in anyone else starts right here. It begins by seeing Jesus Himself. For you’ll never see Jesus in the least and the lowly until you first see Jesus Himself as the least of all. On the cross Jesus became the least of all to save us all. On the cross, bearing your sin, Jesus was literally hungry, thirsty, naked, sick, imprisoned, a stranger to this world—all so that He might save the world, including you. When you see a hurting person, think of Jesus who hurt on the cross. When you see a helpless person, think of Jesus who hung helpless on the cross. When you come across someone who is crushed by the burdens of this world, remember Jesus who was crushed for our iniquities—who died for our sin and rose again to give us victory.

It’s not always easy to see Jesus in our brothers and sisters; so thank God that when He looks at you, He sees Jesus—Jesus in you. It’s true. The all-seeing, all-knowing, un-fool-able God looks at you; and He chooses to see in you His own dear Son, Jesus the Christ. He looks at you and He sees a sheep of the Good Shepherd. After all, you’ve been baptized into Jesus. You’ve been clothed with the righteousness of Jesus. You’ve been nourished with the body and blood of Jesus. And this is why God sees Jesus in you. And this is why you can see the Jesus in those around you. Jesus says that when you serve them, you serve Him. Serve them not to earn the right to be a sheep of the Good Shepherd; serve them because YOU ARE A SHEEP of the Good Shepherd. A heavenly inheritance is waiting for you—waiting for you since before time began.

Posted by Pastor Michael Henrichs at 7:33 AM