The Manger and the Martyr 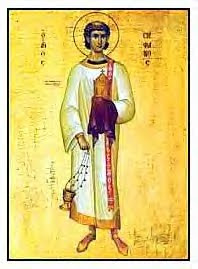 It seems horribly wrong. Or at least it’s a case of bad judgment. It seems so out of place that the tragic death—the murder—of a faithful Christian man should be remembered so close to Christmas. It’s such a harsh and jarring transition: White paraments and festive joy yesterday to the blood-red paraments of the martyrs today. It’s the second day of Christmas, after all—two turtle doves and a partridge in a pear tree. Caroling and mistletoing and ho-ho-ho-ing are still in the air.

But celebrating the feast of St. Stephen on December 26th is a tradition as old as Christmas itself. The one, holy, Christian and apostolic Church has observed the martyrdom of Saint Stephen for just as long as she has observed Christmas. Sometime back in the Fourth Century, December 25th was officially designated as the date on which the birth of Jesus would be celebrated. And sometime back in that same century, December 26th was appointed as the date on which the first martyr would be commemorated.

This was no accident. Placing Christmas and the martyrdom of Stephen right next to each other on the calendar was the church’s way of ensuring that Christmas wouldn’t simply be romanticized into a cute story about a little baby born to a poor couple surrounded by barnyard animals beneath a starry sky. Remembering the death of Stephen today, December 26th, shows the direct connection between the birth of the Christ and the death of His saints. It’s intentional. It’s by design. The manger and the martyr go together.

St. Stephen has much to teach us about Christmas—about what it means for us that the Word became flesh and dwelt among us. Stephen’s death shows us, first of all, that the birth of Jesus did not occur to magically erase all of life’s burdens and problems. Jesus wasn’t born to win us a life on earth that’s free from the distressing and depressing troubles of life.

Stephen was a member of the very first Christian congregation in Jerusalem. Jesus had ascended into heaven only a short time earlier. Everything was new and fresh in the life of the church. The Holy Spirit had come at Pentecost and three thousand souls were baptized and brought to faith in Jesus the Christ. Every day the Christians in Jerusalem were meeting together to hear the Apostles’ doctrine, to pray, and to receive the body and blood of Jesus in the Lord’s Supper. The Apostles were preaching the Word of God with great boldness, and the Lord was adding daily to their number.

Yet, even then there were problems in the church. There was conflict among the first Christians. Every day food was distributed to those who were needy. But complaints arose because some of the widows didn’t think they were getting their fair share. And so a special voters’ meeting was called to address the problem. The result was that seven deacons were chosen, including Stephen, whose main task was to oversee the daily distribution of food. To use the jargon of our congregation, we would consider these men to be the very first board of social ministry.

But please note this important point: Stephen was a layman—not an apostle or a pastor. He was full of faith and the Holy Spirit. He went to work for the church because there were problems in the church—and Stephen wanted to be part of the solution. Stephen gave generously of his time, his talent, and his treasure so that the apostles could focus on the work of preaching and baptizing and feeding God’s people with Jesus’ body and blood. Without dedicated, faithful laypeople like Stephen—without all of you in the pews this morning—without your sacrifice, your commitment, your deep desire to solve problems and make peace—things in this church would quickly grind to a halt. There have always been and there will always be problems in the church—for the church is made up of poor, miserable sinners. I thank God for you men and women who, like Stephen, realize that what God has given us in this congregation is worth preserving, and worth all the sacrifices that you make for our life together.

What ultimately got Stephen into trouble was what He confessed about Jesus. Stephen was a layman, yes, but that didn’t stop him from speaking the truth in love about the Savior. It’s worth noting that the Greek word “martyr” means simply “witness.” Stephen was a witness for the Lord—in life and in death. On trial before the Sanhedrin, Stephen showed that Christmas is about God blessing us with His real presence in Christ. On trial, Stephen recounted much of Israel’s history—how God’s presence had always been linked to a certain place—first to Sinai, then to the tabernacle, then to the temple in Jerusalem.

But Stephen’s main point was that now—since Christmas—since the Word became flesh—God’s presence was not to be found in a certain place, but in a certain Person. God’s presence was now located in the flesh-and-blood person of Jesus the Christ. “The Most High,” Stephen testified, “does not dwell in houses made by human hands” (7:48). Stephen testified that the real temple was now to be found wherever Jesus gives Himself to us. Jesus Himself expressed that same point in today’s Holy Gospel when He lamented, “O Jerusalem, Jerusalem, you who kill the prophets and stone those sent to you, how often I have longed to gather you together, as a hen gathers her chicks under her wings, but you were not willing. Look,” Jesus said, “your house is left to you desolate.” And without the Christ, the temple of the Jews was indeed desolate.

The members of the Sanhedrin resisted the Holy Spirit and sought to kill Stephen for the truth he spoke. Sadly, we too are tempted to work against the truth that Stephen spoke—the truth of God’s presence in our lives. Even among us—those of us like Stephen redeemed by Christ the crucified and washed clean in the splash of Holy Baptism—IN US ALL there are dark and terrible things that masquerade through our lives with sinful special effects—things that seek to push away the Christ and His saving presence—things like human relationships, human pleasures, human pride and suffering. Satan can and does use all of those things to get us to gnash our teeth at the truth of God’s Word and the gift of His presence. Our sin is his success.

But Christmas is God’s great answer to our self-inflicted sin and its heart-wrenching wages. For Stephen, this is what Christmas meant: It meant that at the moment of his death, he was welcomed into the presence of Jesus for all eternity. The angry lies were told for only a short time. The angry shouts were heard for an even briefer time. The bruising stones rained down upon him for just a brief moment. But for Stephen, the presence of Jesus was to be enjoyed forever and ever. “Look,” he said, “I see heaven open and the Son of Man standing at the right hand of God.”

“I see heaven open.” The mission that began at the manger—the mission that was finished at the cross—that mission is fulfilled in each of us when we see what Stephen saw—an open heaven and a waiting Savior. This is why we are now engaged in a twelve-day-long celebration. Jesus was born to destroy death—to bring life and light to Stephen, to you and me, and to all those dear ones you remember at Christmas who have already departed this life in peace and who are already with Christ. Even as our eyes close in death someday, we will surely see what they now see: the Son of Man in human flesh at the right hand of God. Even stone-throwing, teeth-gnashing, stiff-necked sinners like us will see that beautiful sight by grace, through faith in Jesus Christ.

All of our caroling and “merry-Christmas-ing” cannot begin to compare with the voice from heaven which cries out, “Blessed are the dead who die in the Lord from now on” (Rev. 14:13). Shepherd costumes and Christmas sweaters and neckties cannot begin to compare with those who are wearing white robes: “These are they who have come out of the great tribulation; they have washed their robes and made them white in the blood of the Lamb” (Rev. 7:14). Christmas is the presence of Christ. And there is no greater Christmas than seeing Him face to face. God grant us like Stephen to fall asleep in Jesus with this certainty in our hearts: By His manger and by His holy cross, Jesus has opened heaven for us. Amen.
Posted by Pastor Michael Henrichs at 8:59 AM