There’s a lot going on in today’s holy gospel—so much, in fact, that it’s easy to overlook the ominous note that sounds in the very first sentence: “Now when Jesus heard that John had been arrested, he withdrew into Galilee.” John the Baptizer had been arrested. The voice of one crying in the wilderness had now been sequestered in Herod’s dungeon. And it wouldn’t be long before John’s severed head would be served up on a platter—and that voice would be silenced.

You may recall that what got John into trouble—what led to his arrest—was that he publicly criticized the morals of King Herod. Herod had taken up with his brother’s estranged wife, and John called him on it. Everybody knew it was wrong. Everybody still knows that adultery is wrong. Even if you were never taught the sixth commandment, yet the moral law, written on every human heart, screams out with absolute clarity that marriage is holy—that what God joins together man must not separate. Everybody knew it was wrong, but it was John who had the courage and the conviction to speak the truth publicly about Herod’s sin. And for speaking this truth John died a martyr’s death.

The truth—God’s truth—is rarely tolerated in this world. In our nation today it’s the truth about abortion that is so intolerable. Thank God for the thousands who marched in Washington on Friday. Those people are the conscience of our country. Everybody knows that murder is wrong. Everybody knows that taking the life of a helpless human being flies in the face of all that is good and right. Even if you were never taught the Fifth Commandment, yet the moral law, written on every human heart, screams out with absolute clarity that killing the living but unborn is an outrageous act of evil. Everybody knows it’s wrong.

That’s why those who advocate this this evil must resort to lying. They cannot speak openly and accurately about abortion, so they speak in terms of a woman’s “right to choose” and in terms of “women’s reproductive health,” and in terms of “planned parenthood.” That all sounds well and good. But we know the truth.

We know not only the tragic truth about abortion, but we know God’s glorious truth that every human life is sacred—that God loves life—that God sent His Son into this world (first) as a fetus in the womb of a virgin—a holy embryo—and then to die a sacrificial death as the Lamb of God for every precious human life. That’s the truth we are called to speak. But learn from John not to expect applause and accolades, but rejection and a cross. Speak the truth and you may even lose your head. But that’s how it goes for God’s kingdom in this world: It suffers violence. It appears vulnerable and weak. It always comes with a cross.

In today’s gospel the Kingdom of God is on the move and on the march. There’s a subtle but distinct shift underway in Matthew chapter 4. Jesus’ earthly ministry is getting underway. The Kingdom of God is establishing a beachhead from which the Gospel will eventually make its way to the ends of the earth. Jesus begins preaching. Jesus begins teaching. Jesus begins healing those afflicted by disease and tormented by demons. Epileptics, diabetics, and paralytics—Jesus brought hope and healing to them all.

As all this is going on, Jesus relocates. He moves from Nazareth to Capernaum on the Sea of Galilee. It’s in what used to be known as the northern kingdom—a region despised by the southerners in Jerusalem and Judea. The populous of Galilee was half-Gentile and half-Jewish. It was a backwoods kind of a place—not the location you and I would have chosen to start a movement much less a religion. But then again, we’re not in charge. The Kingdom of Heaven is flipped upside down compared to the kingdoms of this world. The last are first. Those who walk in darkness get to see the dawning light first. And so, Galilee becomes ground zero; and Capernaum, a little fishing village, becomes Central Command.

But as all this is going on, Jesus does something that gives away the whole plan. The strategic priority that will carry Jesus all the way to Calvary’s cross is plainly and boldly revealed. Jesus lays all his cards on the table. His strategic priority—what He’s really 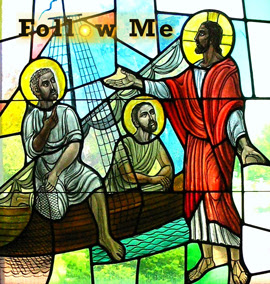 after—what He will stop at nothing to acquire—is followers. Jesus just wants followers—wants people to follow Him in faith. As His first order of business—at the top of His agenda—Jesus says, “Follow Me.”

Jesus calls four fishermen to discipleship with that simple invitation, follow me. Peter and Andrew, James and John. With a word Jesus calls them away from their nets and their boats. “Follow me and I will make you fishers of men.” They used to catch fish in their nets. Now they would be sent to catch people for the kingdom in the net of Jesus’ death and resurrection, by making disciples, baptizing and teaching in His name. These four were not only the first disciples of Jesus, but the first apostles of Jesus. Not everyone is called to leave behind their line of work to become a disciple. Most didn’t. But these four did. They began a new calling, a new vocation.

Thus began three years with Jesus, listening to His teaching, watching the wonders He did. These men would see Jesus through His crucifixion and resurrection. They would see His physical presence disappear into the cloud at the Ascension. And they would go forth until they themselves followed Jesus into paradise, being fishers of men, gathering men and women into the church to confess that Jesus Christ is Lord, to the glory of God the Father.

But as you back things up to that day on the lakeshore when Peter, Andrew, James and John left their nets behind to follow Jesus—do you think they knew what they were getting into? Did they know then how God’s plan for the salvation of the world would unfold? Did they have any idea what the months and years ahead would bring? How could they? Of course, we know all the twists and turns. We know how the story turns out. But don’t forget that these four men at that moment on the lakeshore—they had no idea what was coming. All they had was faith to trust Jesus—faith to follow where He led. And that is everything.

But do you know what you’re in for? Do you know just how God’s plan for your life is going to unfold? Do you know with any degree of accuracy what the months and years ahead will bring for you? How could you? Twists and turns, tears and triumphs, valleys and mountain peaks, drudgery and surprise, sin and grace. And through it all, the invitation echoes down to the depths of your soul: “Follow Me.” You have no idea what is coming. All you have is faith to trust Jesus—faith to follow where He leads. And that is everything.

You may wonder, sometimes, if you are of any use to God and His kingdom. (Or worse, there may be times when you don’t care—times when you don’t give a thought to God’s kingdom and your place in it.) You may think that you don’t have the skills, the aptitude, the personality. You may think that you don’t have the guts to speak the truth about abortion, about adultery, about life and death. When you begin to wonder such things, remember Peter and Andrew, James and John. They were fishermen. Theirs was a low-tech operation in a low-tech world. But God used them to change the world. God used them—used their preaching and their witness and their teaching—to make sure that you—and other fish like you—would be caught up in the net of God’s grace and mercy.

That’s right, think of yourselves not as fishers of men. Think of yourself as a fish. And don’t pretend for a minute that you’re some kind of a good, religious fish—that you’re so smart that you jumped right into Jesus’ net of grace. Doesn’t work that way! I’m no expert, but even in my limited fishing experience, I have never, ever, encountered a fish that wanted to be caught. No, against your natural will and instincts, you’ve been caught. And you’ve been cleaned—made holy through faith in Jesus—to go out and do holy things—not knowing where you go or what tomorrow may bring—but only that you are following Jesus, and that you will go where He has gone, that you will live and reign with Him forever.

Posted by Pastor Michael Henrichs at 7:01 AM