I went in for a check-up with my doctor last week. I hadn’t been to the doctor’s office in several years, as I subscribe to the “apple a day” theory. But having recently crossed the fifty-yard line, I made the appointment and kept it. I had forgotten what a dreadful place the waiting room can be. All those sick people! One woman appeared to be in so much pain she could barely walk. Another woman was coughing up some kind of contagious congestion. If only there was a way to see the doctor apart from all those sick and diseased people.

The scribes and Pharisees, it seems, had a similar complaint about Jesus and the company He was keeping: This man receives sinners and eats with them. If only Jesus wasn’t always surrounded by all those poor, miserable sinners. But in the same way that doctors are always surrounded by sick people, Saviors hang out with people who need to be saved. Christ Jesus came into the world to save sinners. So it really shouldn’t be a surprise that tax collectors, prostitutes, and other unsavory sinners seemed always to be swarming around Jesus.

But for the Pharisees this was—at a minimum—bad optics. The Pharisees couldn’t comprehend the fact that they shared the very same sin-filled DNA as did the tax collectors and the other Deplorables. And we have the same tendency to look down our hypocritical noses, while singing: Chief of sinners though I be, you know who is worse than me. But unless you see yourself as a sinner—or as St. Paul writes, “the foremost” of sinners—you will have little use for Jesus as the Savior of sinners. Unless you can see the depth of your own sin and the awful judgment it has earned for you, then you will have no use for Jesus’ forgiveness and the justification that comes by grace, through faith, for Christ’s sake.

But see yourself rightly as the chief of sinners, and you will enjoy the good company and the good fellowship of the Good Shepherd--Jesus the Christ. Jesus loves to hang out with sinners because He came to save sinners. They are His stock in trade, His specialty, His cup of tea.

To illustrate all this, Jesus fires off a few parables about being lost and found. What man of you, having a hundred sheep, if 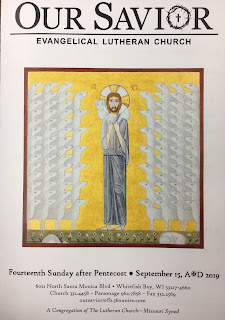 he has lost one of them, does not leave the ninety-nine in the open country, and go after that one that is lost until he finds it? And when he finds it, he lays it on his shoulders and gives it a free ride back home. And then he’s so overjoyed at finding the lost sheep that he throws and party for his friends and neighbors.

Or what woman, having ten silver coins, if she loses one coin, does not light a lamp and sweep the house and seek diligently until she finds it? The pattern is the same in this parable. The lost are diligently sought, and when found, there is rejoicing and a big party—a party which is likely going to be more expensive than the value of the lost-and-found coin.

We’ve heard these parables so many times that we forget there’s actually a much more practical, pragmatic direction they could have gone: A sheep that wanders will continue to be a flight risk. And ninety-nine safe and sound, well-behaved sheep are hardly worth abandoning for the sake of one deplorable sheep that’s just a pain in the neck. So just write it off and forget about it. Declare the loss on your taxes, collect the insurance, and tend to the ninety-nine good sheep instead. And the same goes for the lost coin. Why waste a whole day looking for one coin, when you can forget about it and go to work and earn several additional coins?

But that’s not the strategy of the Savior. That’s not the method of the Master. He wants all to be saved—not just the many or the most. He wants all one hundred sheep in His pasture—all ten coins in His coffers. He wants you, dear sinner, along with all other sinners. He always takes the initiative to search and to seek and to save the lost in their lostness. They are why He came—to save a lost humanity, wandering in the wilderness of sin and death, awaiting a hellish eternity of separation from God. This is why Jesus came.

You are the lost sheep. “All we like sheep have gone astray,” Isaiah says, “Everyone has turned to his own way.” When was the last time you were really lost? I don’t think it happens as much as it used to—what with Google Maps and all. One Sunday morning this past June I was in Leipzig, Germany. I was taking the tram to visit the church of our missionary, Kim Bueltmann. Long story short, I got on the right tram . . . but going the wrong direction. I kept wondering why it was taking so long to get to my stop. By the time I realized my mistake and stepped off the tram, I was on the wrong side of town, in a foreign country, and there wasn’t another human being to be seen. I was lost. But, at least I knew I was lost. Think of all the lost sheep you encounter every day who have no idea—who don’t even realize their predicament—who have never even heard the phrase, “poor, miserable sinner.”

For all these lost sheep—including you—Jesus Christ sought us when we sought Him not. Jesus came to find you lost and dying, to place you on His shoulders and carry you back through the wilderness to God. You are that valuable to God—chief of sinners though you be. God refuses to write you off. Instead, He makes you the object of His seeking, saving love. He baptized you. And there at the font you were found, placed on the Savior’s shoulders, and welcomed into God’s family. Your God shook out every rug, looked under every sofa cushion, turned the whole world upside down in order to find you in your lostness. And when you were found, the angels of heaven rejoiced. I once was lost, but now am found—was blind, but now I see.

That’s grace, my fellow sheep, amazing grace. The saying is trustworthy and deserving of full acceptance, that Christ Jesus came into the world to save sinners, of whom I am the foremost. Notice that the Apostle Paul wrote in the present tense: sinners of whom I AM the foremost, not sinners of whom I WAS the foremost. This isn’t some aw’ shucks humility—Paul putting himself down just to be self-deprecating. The only person whose sins you really and fully know are your own. And if you know your own sins, then you don’t know a single sinner worse than you. You, like Paul, are chief, foremost, numero unos one and all.

You were lost in sin and death. So Jesus took your miserable sin—all of it—upon Himself. On the cross, Jesus became the foremost sinner who ever lived—the chief of sinners—the sacrificial lamb of God who takes away the sin of the world. Jesus died and was buried. He was “lost,” we might say; in the same way we say we have “lost” someone when they die. Jesus was lost; He died; He was never coming back. Only He did—on the third day He rose again. And He still lives. And He still takes great joy in seeking and saving lost sinners.

The day will come for you, my friends, when you will begin to feel hopelessly lost—when the wisest doctors and the finest medical care will not be able to rescue you. You will feel yourself slipping away from loved ones and from all that has given you your bearings in this earthly life. But as you close your eyes and breathe your last, you will again know the joy of being found. For the Lord Jesus and His holy angels will come to you. And they will bear you home. How can you be sure? Because Jesus Christ receives sinners and eats with them.

Posted by Pastor Michael Henrichs at 7:26 AM