When you ask a question of Jesus, don’t expect a direct answer. It often seems that Jesus doesn’t give direct, specific answers to His questioners. It’s not that Jesus doesn’t know the answer. And it’s not that Jesus is afraid to give a truthful, honest answer like so many politicians these days. But much of the time people simply ask the wrong question. Yet Jesus always responds. Despite our inability to ask the right questions, Jesus, thankfully, always tells us everything we need to know.

Lord, will those who are saved be few? That was the question some anonymous person tossed at Jesus as He was on His way to Jerusalem. It’s not a bad question per se. In fact, maybe you’ve wondered the same thing. Are only a few people going to be saved? You have to wonder, don’t you, as you look around at the world today? And, sadly, you really have to wonder as you look around at the church today. Today many churches have become houses of entertainment or places of personal therapy where the main goal is to soothe your self-esteem and make you feel good. Gone are the days when most churches stood firm on the teachings of Scripture. Gone are the days when the main thing in most churches was repentance over sin and forgiveness in the name of Jesus. It all starts to make a person wonder, Lord, will those who are saved be few?

When that question came His way, Jesus had more to go on than we do. As true God, Jesus knew right away what was going on inside the heart of His questioner. Jesus knew the person’s motive—knew, in fact, whether that person would himself be saved. Jesus knew it all as He prepared to give His answer. But we don’t know any of that. We aren’t told what prompted the question.

Lord, will those who are saved be few? Perhaps the questioner was worried, or despairing. Perhaps as he surveyed the huge crowds who were swarming around Jesus—perhaps as he took note of the vast number of disciples whose lives were turned around after an encounter with the Christ—perhaps he began to wonder, “Is there room enough for me in God’s kingdom? Do I measure up? Do I have a reservation at the heavenly banquet—can I be sure of getting a seat? Or do I need to be worried?” Perhaps he asked the question in angst: Lord, will those who are saved be few?

Or, on the other hand, perhaps it was pride that prompted the question. Maybe the questioner was smugly secure in his salvation. “Jesus, I know I’m in. I know I’m good enough. But take a look at all these other losers hanging around—prostitutes, tax collectors, Gentiles—You’re not telling me that these types of people are also part of the Kingdom of God, are you?”

We need to be wary of that attitude—we who know what it feels like to sit in a pew on a regular basis. Do you ever catch yourself thinking along the lines of, “I thank you God that I’m not like other people who don’t have the decency and common sense to come to church on Sunday morning? I thank You God that I’m not like all those sinners who don’t even realize how sinful they are. I thank you God that I belong to a conservative church with a conservative pastor, and not one of those anything-goes churches.” We need to watch out that we don’t start thinking of church as the equivalent of a political party, where all the like-minded get together and talk about how stupid everyone else is who doesn’t see things our way.

But whether the question was asked out of angst or out of pride, at least the salvation of other people was a concern for the questioner. Is it also a concern for us? Do we have a collective concern that when people come from the north, south, east and west to take their places at the feast in the kingdom of God that the halls of heaven will be filled to capacity? Or is our sin one of apathy or indifference? We’re awfully glad to be saved by grace—delighted to be baptized—to call Jesus our friend. But as for those outside the kingdom—those who will be eternally shut out to weep and gnash their teeth—how much concern do we have for them?

A parable is told of a tidy little church filled with nice people. There was always something going on—fun sorts of activities—service projects. It was a lovely church where the gospel was preached and people truly cared about one another. But in the back of this church was a little box—a box covered by a film of dust and the remnants of a few cobwebs. But if you looked closely enough at the box you could still see its purpose which was engraved in bold letters on the lid: “Mission Offerings.” That unused offering box for missions spoke volumes about that church. They were complacent. They were comfortable. They were selfishly unconcerned about the salvation of others. It never would have occurred to them to earnestly ask whether only a few were going to be saved; and then to earnestly do something to increase the “few” by at least a few more. 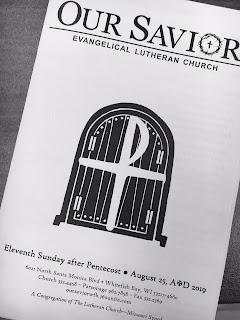 narrow door, because many, I tell you, will seek to enter and will not be able.” There is an urgency attached to the gospel because the way into the kingdom of God is incredibly narrow. Everything else is a brick wall. There is only one, narrow door. Forget what you hear out there in the pop culture and pop spirituality about how we all worship the same God—or how all religions are more alike than different. No, the truth of the matter—the only truth that sets you free—is that the opening to eternal life with God is a thin, narrow, cross-shaped opening in a solid wall—a solid wall that sinners cannot penetrate in any other way. That wall says, “Be perfect, be holy, keep every commandment in thought, word and deed or else you cannot enter.” It doesn’t matter how hard you hurl yourself against that wall. You can’t make it through on your own.

There is only one way through that wall of Law to God, and that’s through the narrow opening created by the perfect life and sacrificial death of Jesus, the Son of God. Jesus Himself is that narrow door that leads to life—a door that is no wider than the distance from one nail-pierced hand to the other.

This is what makes the Christian faith distinct from every other religion out there. You don’t work your way in. You don’t pray your way in. You simply trust that you are in by virtue of the death of Another. You trust that you are righteous before God—not for what you have done, but for what Jesus has done and given to you. You simply trust that in baptism you are united with Jesus in His death and His resurrection—that you are freed from the curse of the Law—that in Jesus Christ you have been pulled through the very narrow door created by His death on a cross.

The way to salvation is a narrow, exclusive way. “No one comes to the Father except through Me,” Jesus said. His death and resurrection are the only way that leads to eternal life. There is no other way. All other paths—no matter how pious, how religious, how rigorous, how full of works and rituals and disciplines—they all run headlong into the brick wall of the Law.

But hear this: through Jesus—through faith in Jesus as your sacred substitute—you can be absolutely sure and certain—joyfully confident—that your sins are forgiven, that you have a place at the feast in the kingdom of God, that you as a baptized believer matter to God eternally. Nothing can snatch you out of His nail-scarred hands.

The door to life is narrow indeed, but it’s just wide enough that any and all who believe can be led right through it. Jesus Christ died for all. He is the Lamb of God who takes away the sins of the whole world—who calls His followers to make disciples of all nations. Just as one man, Adam, dragged all of humanity into sin and death, so also one man, Jesus Christ, pulls all humanity into His forgiveness and life by His own death and resurrection. This doesn’t mean that all people will be saved, although that’s what God earnestly desires. This means that there’s always, always room for more in the kingdom of God—that our gifts for missions are eternally important, that many who appear to be the last, the least and the lowly of this world, will end up in first place when all the dust settles in the life of the world to come.

Will the number of those saved be few? Tough question. One that we can’t answer directly. But whatever the answer, the key to that answer is Jesus. He is the narrow door that leads to life. He is the firstborn of all creation, who finished dead last on a cross, who now lives and reigns with the Father and the Holy Spirit, one God, now and forever. Amen.

Posted by Pastor Michael Henrichs at 9:11 AM