Dear Saints of Our Savior,

Do you have a nickname? Nicknames can be funny things. They can be silly or significant. They can be demeaning or descriptive. Several of Jesus’ disciples had nicknames. Jesus Himself assigned a nickname to Simon, saying, “You are Peter” (which can also be loosely translated, “You are Rocky.”) Says a lot, doesn’t it? And then there were the brothers, James and John. Together they were nicknamed the “Sons of Thunder.” That sounds really impressive, although it might just mean that they snored really loudly. You never know with nicknames.

And then there’s Thomas. You surely know his nickname. He’s not just Thomas, but “doubting Thomas.” But actually, he’s never called by that nickname in the Bible. Instead, Thomas’s true nickname is Didymus, which means: The Twin. Thomas, the Twin. The problem is, we don’t know when or why Thomas was called “the Twin.” Presumably, there was a sibling with whom he shared a womb. But nowhere are we told the true identity of Thomas’s twin. Thomas’s twin is a bit of a mystery.

Thomas always comes up on this Sunday after Easter because he had the misfortune to miss church on the very first Easter Sunday. He wasn’t there in the upper room when the risen Lord appeared to His disciples who were cowering behind locked doors. Jesus simply came and stood among them, saying, “Peace be with you.” After that, Jesus makes those men His apostolic ministers, giving them the Holy Spirit and sending them out to forgive sin—and to withhold forgiveness. Some people think the church spends too much time on matters of sin and forgiveness. But sin and forgiveness is the very first topic Jesus takes up after being raised from the dead. That says something, don’t you think?

But Thomas Didymus—Thomas the Twin—he wasn’t there. He missed out. We don’t know why; but Thomas wasn’t there to see or to hear 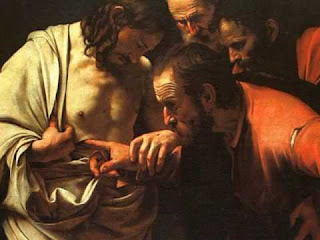 Thomas was an enlightened, modern man—not some ignorant, gullible, superstitious, rube who believed ever rumor than came down the pike. Yes, he heard the news from trusted friends and fellow disciples. Yes, Thomas had been there when Jesus had predicted His own death and resurrection at least three times—heard it with his own ears. But, no, still, Thomas did not believe it.

But I say thank God for Thomas! For his faithless skepticism ultimately strengthens the truth of the resurrection account. Think about it. If you were making up the resurrection of Jesus to deceive future generations—if you were concocting a myth or legend about a resurrected Jesus—would you have someone from His inner core of disciples doubting His Word, questioning the good news, demanding hard evidence? I don’t think so. You’d have Thomas shouting, “He is risen indeed, alleluia!” Thomas isn’t shouting, but doubting—actually worse than doubting, Thomas is faithless. He does not believe.

A whole week goes by. It’s the next Sunday. It’s this Sunday—the Sunday after Easter. And Jesus shows up again. (Sunday seems to be a significant day, doesn’t it?) It’s Sunday and Jesus appears to His gathered disciples—His tiny church. And with Jesus: His body, His blood, the wounds of His sacrifice for sinners. His peace, His forgiveness, His Holy Spirit. All of it on a Sunday morning. Those same gifts are right here for you—on this Sunday. This is the foundation for Christian worship and liturgy. The only difference between that room and this room is that our doors aren’t locked and we can’t see Jesus. But we have the same wounds, the same words, the same Spirit.

Thomas shows us what happens when you aren’t here—where Jesus gathers with His people. It’s toxic to your faith. But Thomas also shows us what to do when doubt gets the upper hand. He shows us where to go when it seems like faith is fading away. For when Jesus appears on the Second Sunday after Easter, Thomas is there, doubts and all. If you’ve got doubts, do what Thomas did. Bring them to Jesus. Being a baptized believer means that you are always dealing with things unseen—things you can’t measure with the methods of science.

The great men and women of faith have always had doubts. Abraham and Sarah laughed at the promise of God that they would have a son in their old age. Mary wondered how she could conceive and bear a son in her virginity. St. Paul must have wondered why so much misfortune and so many false teachers hounded him along every step of his missionary work. I and my fellow pastors have doubts too—doubts about the power of God’s Word as we see so many baptized, catechized Christians just walk away from it to pursue their own agendas. And I suppose you too know what it is to struggle with doubt. The devil makes sure of it.

Who is the twin of Thomas? You are. We are all twinning with Thomas. You are the double of Thomas Didymus. We are, as Luther famously wrote, simultaneously saints and sinners. We are, at the same time, faithless and faithful. We are riddled with doubts and brimming with confidence in Christ. We are fearful and courageous in Christ our Savior. You have a long lost twin; and his name is Thomas. And what we learn from our dear twin, Thomas, is to bring all of our sins and all of our doubts to church—to the altar and pulpit—to the wounds of Jesus and the words of Jesus. And there—here—Jesus will meet us and give us what we need.

Put your finger here, and see my hands; and put out your hand and place it in my side. This is the genuine body of Jesus. Not a ghost. Not an apparition. Not just a spirit. Flesh and bone. The risen Christ is touchable. And the wounds are the clincher—the glorious proof of His love and His sacrifice for you—still visible in His resurrected body. By His wounds, we are healed. Those wounds forever mark Him as the Lamb who was slain. Even seated at the right hand of the Father in glory, Jesus bears the scars of His sacrifice as an eternal reminder of your forgiveness. Those wounds teach us that the sacrifice of Jesus is never just a distant memory of a past event. Christ’s sacrifice for us is always visibly, tangibly, concretely given and applied to us. His wounded hands and side for Thomas; His body and blood in the Holy Supper for us—the same thing.

And with the wounds of Jesus come also His words—faith creating, faith enlivening, faith sustaining words: Do not disbelieve, but believe. And Thomas does. And together with our twin Thomas we can only confess, “My Lord and my God.”

And then comes a blessing from our Lord—a blessing not on Thomas, but on all his twin siblings: Blessed are those who have not seen and yet have believed. Blessed are you this second Sunday of Easter, that you believe Christ is risen from the dead. You trust that though your sins are as scarlet, yet Jesus makes them whiter than springtime snow in April. No, we don’t get to see like Thomas. But blessed are we to hear, to take and eat and drink—to be born again in Holy Baptism. Blessed are you, for you have not seen and yet believe. And believing, you have life in the name of Jesus.

In the name of the Father, Son and Holy Spirit. Amen.

Posted by Pastor Michael Henrichs at 7:21 AM