Dear Saints of Our Savior,

The disciples must have been appalled. They had just watched Jesus interact with a potential new follower—a potential new recruit who was rich and young and powerful. His deep pockets would have been just the ticket for the tiny, rag-tag band of followers Jesus was assembling. I suspect the disciples couldn’t believe their ears when they heard Jesus tell this pious, sincere man to sell everything he had and give it all to the poor. They must have been livid when Jesus just let the man walk away disheartened and sorrowful. How did Jesus expect to “grow the kingdom” and “fund the mission” with only a bunch of poor people for followers?

The disciples must have been scratching their heads because they lived in a culture where wealth was admired. More than that, wealth was considered the ultimate sign of God’s blessing. When you counted your blessings, the more you could count, the more blessed by God you were. Prosperity preachers like Joel Osteen would have fit right in. To be rich was a sure sign of God’s favor. And if you were poor—well, you must have done something bad to deserve that.

So, just imagine how many jaws must have dropped when Jesus declared: How difficult it will be for those who have wealth to enter the kingdom of God. St. Mark said they were “amazed” at his words. And they were “exceedingly astonished” when Jesus went on to say: It is easier for a camel to go through the eye of a needle than for a rich person to enter the kingdom of God. Threading a needle 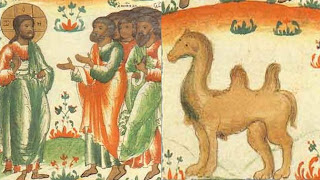 with thread is hard enough. But squeezing a camel through that tiny space—or (we might say) driving your SUV through it—well, that’s absurd. And that’s the point! It illustrates the spiritual peril faced by those who have lots of money and lots of stuff.

Nobody had more money and more stuff than King Solomon. If you want a cold dose of reality, read what Solomon says about riches and possessions in the book of Ecclesiastes. We got just a taste of ten verses earlier this morning. King Solomon had it all—power, riches, possessions, wealth, wine, women, you name it. He’d been there and done that and got the T-shirt. But as an old man, looking back, Solomon labels it all with a single word: “vanity.” Chasing after wealth and riches, he contends, is about as satisfying as chasing after the wind.

Now, if you think that none of this applies to you because you’re not wealthy—think again. You may not be in the top one percent. But by any method of measurement—by any metric of comparison—we are all among the wealthiest people to ever walk the face of the earth. Jesus is talking to us!

But let’s be clear: the problem ultimately isn’t with money or possessions. Money is NOT the root of all evil. But the love of money—the idolatry of money—that’s where things get downright dangerous. It’s when wealth falls from the good hand of a generous God into the hands of sinful people—well, that’s where the trouble begins. The problem with wealth is that we get religious about it. It’s nearly a universal truth that money equals security. The more wealth you have, the more secure you are. Wealth provides us with confidence, with peace of mind, and contentment. With the right investments and the right broker and the right returns, you have nothing to worry about.

But that universal “truth” is false. The truth is that wealth can’t deliver any of that—not security, not confidence, certainly not peace that passes understanding. And yet, we believe it can. Our wealth becomes our god. Luther, in his Large Catechism, writes that a god is that to which we look for all good: “That to which your heart clings and entrusts itself is . . . really your god.” So, if money is your source of security—if money gives you peace of mind and contentment—then money is your god. Money is your idol. But you should know that, while idols like money promise everything, they ultimately deliver nothing.

There’s only one remedy for idolatry—and that’s repentance. Repentance is that remedy. To repent means to turn from our idols—to let go of them. We need to have a change of heart and mind when it comes to the wealth we call our own. In fact, we need to dethrone our idols. But how do we do that? How do we take that idol called money and knock him off of his throne? Give it away. The surefire way to show that you control your money (and your money doesn’t control you) is to give it away. Let it go. Donate it. Share it. Offer it in faith to the one, true God who saved you from your sin on the cross, and who delivers you from death by the power of His resurrection.

Jesus Christ is no idol; He’s the real deal—true God and true man—who for us men and for our salvation came down from heaven. In Him alone are all things possible—including your salvation. Only if we get Jesus “right,” will we ever be able to get wealth and money “right.” Jesus left behind the wealth and riches of heaven to join us in our poverty and toil under the sun. Jesus became poor for our sakes. He became our sin. He died our death. He willingly gave up father and mother and brother and sister and children and lands and houses. He was tempted by Satan that all the kingdoms of the world and their glory and riches could be His for one little act of worship; but He refused. Instead, Jesus chose the way of the least and the lowly—of poverty and weakness and loss.

Jesus did the impossible—the thing that only God can do. He saved you. He took upon Himself the poverty of your sin—the idolatry, the greed, the selfishness—He took it all. And in exchange He now gives you true security that lasts for eternity, forgiveness for your sins, and peace that passes understanding. It may well be impossible for a rich man to squeeze Himself through the narrow door of heaven, but Jesus can fit through that door. And He has promised to take you with Him—along with all who trust in Him.

Trusting in Jesus for all good, you now can live in true freedom. You don’t need to cling to wealth and riches as though they could save you and give you peace. You cling to Christ—who clings to you. Whatever wealth you have is given by Him. And what should you do with that wealth? Solomon might say to enjoy it . . . while you have it. Live generously. Be content with what you have. With Christ at the center of life, wealth takes its proper place and perspective. Do you have plenty? Then enjoy, and share the joy with others. Are you in need? Then rejoice that your life is free from the pressures and clutter of wealth—and remember that you have treasure in heaven.

Faith clings to Jesus Christ. But faith holds on to the stuff of this world with a very loose grip—a very gentle grasp. We hold and handle things like money and possessions with a carefree heart. We know that the stuff of this world has no lasting value. So don’t knock yourself out trying to grab and grasp as much as you can. You’ll have to let it all go at some point. And some things you’ll never get a hold of. And that’s okay. For your heart is at rest in Jesus—Jesus who gives you everything by faith alone: the forgiveness of sins, the resurrection of the body, the life everlasting.

So enjoy the food on your table, the wine in your glass, the work God has given you to do each day. These are gifts from Him to you. And if you hold them loosely; then they will never get a hold on you.

Posted by Pastor Michael Henrichs at 7:44 AM