When I took my first-ever trip to Germany last summer, there was nothing I depended on more than Google Maps. With one glance at my phone, my navigation needs were mostly met. I knew right where I was. I got my bearings quickly. I could emerge from a shadowy, underground subway station into the bright Berlin sunshine, and pretty much immediately, I knew which way to walk—despite never having traveled those streets before in my life. With Google maps I knew where I was; I knew where I had been; and I knew where I was going.

The Ten Commandments serve a similar purpose in the Christian’s life. The Ten Commandments—and especially that all-encompassing First Commandment—serve as a kind of spiritual GPS as we travel along life’s way. Whether you give much careful thought to the Ten Commandments or not, they provide a center of gravity—a solid point of reference—for us. With one simple sentence—You shall have no other gods—God simultaneously shows us both the way we should be going and just how far we have strayed from that way.

Our text this morning—the chapter in which the Ten Commandments are first recorded—is Exodus 20. To me, that’s always a little bit surprising. Why did it take so long to get these timeless truths inscribed on two tablets? We are seventy chapters into the Old Testament. 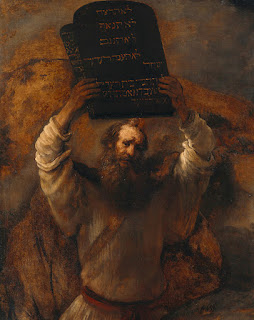 We are at least seven centuries past the call of Abraham, and who knows how many centuries past that awful day when our first parents fell into sin and ruined everything. Why did the Lord wait so long to lay out the rules? Two simple Power Point slides could have sufficed. If I’m God, I’m setting Adam and Eve down in Genesis chapter four and giving them ten bullet points to take to heart. But the Lord waits. I wonder why?

Well, as many of you already know, the Ten Commandments are just a written expression of what we call the “Natural Law.” It’s called the “natural” law because God writes it upon the heart of every human being. So, long before the Lord took the time to give Moses those two tablets, that content was actually already inscribed on every human heart. Every human being has a conscience—an inborn sense of right and wrong. Long before you ever learned there was such a thing as the Fifth Commandment, you knew that murder was wrong. You knew that parents should be honored—that stealing and lying and adultery were wrong. In a sense, God only waited until Exodus chapter twenty to formalize what was already naturally known.

This means that there really aren’t too many surprises when it comes to the Commandments. What is a surprise is that the Bible nowhere calls them the “Ten Commandments,” and that not everybody numbers them exactly the same way. There may be a lot of differences between Lutherans and Roman Catholics and Jews; but we’re all on the same team when it comes to numbering the commandments. We see the command against carved images as falling under the First Commandment, leaving two commandments concerning coveting at the end. The Eastern Orthodox and other Protestants number things differently.

But ultimately the numbering doesn’t matter because, however you slice it and dice it, “God spoke all these words.” And all these words—all these commandments—still hold and still apply to us today. No statute of limitations. No expiration date. Jesus didn’t abolish the commandments. If anything, He sharpened them. He brought them to bear on human conduct at the very deepest level. Avoiding adultery, for instance, is now much more than just avoiding sexual intercourse with the wrong people; for Jesus tells us that even our private thoughts must be sexually pure and decent. Likewise, avoiding murder is much more than just refraining from plunging my knife into my neighbor’s back; for Jesus tells us that even hateful thoughts break the Fifth Commandment.

Time doesn’t allow us to explore all Ten Commandments in one sermon—you’ll be thankful to know. Such a sermon would probably leave you feeling more than a little depressed—more than a little inadequate. For your commandment-keeping has been a colossal failure. Your performance has been pathetic. You have not measured up to God’s standards of holiness, and you never will.

But for a bit of good news, consider again why God waited as long as He did to formalize His commandments on tablets of stone. In many ways, God’s timing tells the whole story concerning His commandments. There’s one simple sentence we dare not overlook this morning. For the Decalogue does not begin with the words “You shall” or “You shall not.” No, it begins with the words “I am—I am the Lord your God, who brought you out of the land of Egypt, out of the house of slavery.”

What took the Lord so long to scribble out those commandments? What held Him up? He first of all had to baptize a people for Himself in the waters of the Red Sea. He first of all had to save and deliver His people from slavery and death—without any merit or worthiness in them. Because only then—only after they saw Pharaoh’s horses and chariots washed away forever under the waves of the Red Sea—only then could they know that this God was their God. Only then could they believe Him and trust Him. Only then could they see that the relationship between them was ultimately governed by grace and mercy and love. The commandments didn’t come first. First, God acted. God saved. God delivered.

Only then could the Israelites know that they were loved by this God, Yahweh. Only then could they understand that the words which followed—the Ten Commandments—were not just rules for the sake of rules—or rules by which to earn God’s acceptance. They already had God’s acceptance. No, these commandments were given in love. It’s the very same reason God has given you these Ten Commandments: Because He loves you. He is your God. You can believe Him and trust Him. He has washed you—not with Red Sea waters—but washed you in the tide that flows from the pierced side of His beloved Son, Jesus the Christ.

Israel knew her God because of what happened at the Red Sea; but you know your God because of what happened at Calvary. How do we know that God is for us and not against us? How do we know that His rule is one of grace and mercy and love? We see it at Calvary. There He makes it clear that He is your God, who has rescued and delivered you from sin and death.

We’ve made a royal mess of God’s commandments; so God has sent His royal Son into the midst of our mess. He is bone of our bone and flesh of our flesh. He is like us in every way—yet without sin. And although His commandment-keeping was perfect, yet He takes your sin and He answers for it. He takes your death and overcomes it. All this He did for you, so that you might know Him by faith as your God—the God who forgives you, the God who makes Himself your brother, and who gives your life eternal meaning and significance.

He is God; we are not. You shall have no other gods. He is number one. What He gives and says goes. This can be rough. We’re often reluctant to let Him have the final say. We all have our personal idols that we like to bring into the conversation—to get a broader perspective on things. But be careful with that. God is in the idol-destroying business. And when He’s through with you, He may just leave you with nothing—with nobody at all to rely on—but Him alone. That’s the sort of love He shows to all of us from time to time. And this is good. For when He cleanses us of our other gods—when He cleanses us of all our attempts to play God and to tell God how to behave properly—well then, what we are left with is the true God. He’s the God in the manger and the God on the cross—a God you can rely on and love—a God from whose nail-scarred hands we are given life that lasts forever.

Week after week the people of God gather right here. I’m sure you probably didn’t need Google Maps to find your way here. But for decades this place has been a solid reference point for God’s people—a place where we get our bearings—where we get reoriented to the Savior at the center of our universe. In the Divine Service we take our place in God’s throne room—with angels and archangels and all the company of heaven. We remember the relationship we have with God—the one He forged through water and the word: In the name of the Father and of the Son and of the Holy Spirit. That, my friends, is a solid point of reference—a very good place to be. Here in God’s presence, we get things sorted out. We see clearly where we’ve been and where we’re going. We confess and get rid of everything that has gotten in the way—every idol, every false god, every sin. We confess it all and ask forgiveness. And that forgiveness is given in the name of Jesus. Here we drink deeply from His Word. We are fed from His altar. We respond with prayers and praises. And then we go back outside to the callings He has given us.

But as we take our leave from here, we have our bearings. By God’s grace, we know where we’re going. We know that one day we shall emerge from this dark land of shadows into the bright light of God’s presence. Google Maps can’t get you there; but that’s okay. You know the way. Just follow Jesus.

Posted by Pastor Michael Henrichs at 7:22 AM