Who Do You Say I Am?

Who . . .is . . . Jesus? That’s the question of the day. But do we really need to be asking that question here? I mean, this is a Christian church after all—a congregation of the Lutheran Church-Missouri Synod. Christ crucified is literally the focal point of this 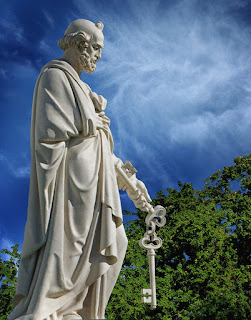 sacred space. And yet, that question, Who is Jesus? Who do you say that I am? it has a way of getting our attention. There’s a lot riding on how you answer that question. That question is deeply personal (not private, but personal).

It’s easier to report on what other people think of Jesus. When Jesus asked, Who do the people say the Son of Man is? the answers He got were varied and predictable. Some say John the Baptizer, back from the dead. Some say Elijah, who was supposed to appear before the coming of the Messiah. Others say Jeremiah or one of the prophets. In so many words, a great man among religious men. Just like today when people say something complimentary about Jesus without confessing the big thing: He’s a great moral teacher. He’s an example on how to care for the poor and sick. He’s a true friend in times of trouble. That’s all very nice. But it’s not nearly enough.

But who do you say that I am? Now Jesus gets at the heart of the matter. Never mind what the polls say, what about you guys? Simon Peter speaks up, as he always does. Good old Simon Peter. He’s like that one annoying kid in the classroom who always has his hand up in the air—who always thinks he knows the answer—to whom attention must be paid. I always imagine the other eleven disciples trying not to roll their eyes as Peter cleared his throat and began to speak: You are the Christ, the Son of the living God.

But instead of the usual correction or condemnation from Jesus, Peter for once is commended! “Blessed are you, Simon bar-Jonah.” Peter got it right. Jesus IS the Christ, the Messiah, the very fulfillment of all God’s promises to Abraham, Isaac, and Jacob, Moses, David and all the prophets—the Son of the living God. You couldn’t get a more correct, orthodox answer than that.

Blessed are you, Simon . . . but. You didn’t think this up on your own. This confession of yours came straight from the Father in heaven. So, no gold star for Peter. No merit badge or trophy. To confess that Jesus is the Christ, the Son of the living God, is not something we can do by our own reason or strength or IQ or intelligence. No one can say “Jesus is Lord” except by the Holy Spirit. You, like Peter, can take no credit for confessing the divine truth about Jesus. All you can do is receive the blessing that comes from such a confession: Blessed are you!

Peter’s confession was rock solid. That’s why Jesus called him Petros, Peter, Rocky. Because on that rock-solid confession Jesus will build His church and the gates of hell will not prevail against it. This is important. Who builds the church? Jesus does! Who gives the church growth? Jesus does! And He does it all based on Peter’s rock-solid confession that Jesus is the Christ—not on the person of Peter. There’s nothing solid about the person of Peter at all. The church is not some personality cult of Peter or any other pastor. A church built on Peter would be on a slippery slope. The beauty of Peter’s confession is that he doesn’t point to himself, but to Jesus. And you can’t be more rock-solid than when you’re confessing a crucified and risen Christ. Even the gates of hell cannot compete with that!

This is the true, hidden strength of this (and every) congregation. Our strength lies not in the personality of our pastor, or in the beauty of our hymns, or in the simplicity of our sanctuary. Our strength is our foundation—the rock-solid confession that Jesus is the Christ, the Son of the living God—a truth we quietly and calmly assert before the whole world every time we unite our voices in the Creeds of the church.

Did Peter fully realize what his words meant that day? No, not fully—not yet. As we’ll hear next Sunday, the same Peter who could confess the Christ with clarity in one breath, could become a spokesman for Satan in the very next breath. Peter envisioned a conquering Christ, not a suffering servant.

But Peter came to learn what we also have come to know: To confess Jesus as Christ and Son of God is to confess Him as crucified and risen from the dead. There is no other Jesus—no other way to be the Christ than by dying and rising. This is how death is defeated. This is how our sin is atoned for. This is how all things will be made new—by Jesus’ death on a cross for the sins of the world. Those who would flatter Jesus by saying all sorts of nice things about Him, but refuse His bloody death and reject His resurrection—they are on very shaky ground.

There’s really no middle ground where the Christ is concerned. Either He is Lord or He isn’t. Either He is the Messiah or He isn’t. Either He is the Son of God or He’s a lunatic. As C. S. Lewis famously wrote in Mere Christianity: Either this man was, and is, the Son of God; or else a madman or something worse. You can shut him up for a fool, you can spit at Him and kill Him as a demon; or you can fall at His feet and call Him Lord and God. But let us not come with any patronising nonsense about His being a great human teacher. He has not left that open to us. He did not intend to. (p.56)

And we can’t forget the keys. Jesus said, “I will give you the keys of the kingdom of heaven, and whatever you bind on earth shall be bound in heaven, and whatever you loose on earth shall be loosed in heaven.” What does this mean? Keys equal authority—the authority to open and shut, to bind and to loose. It’s a huge thing to have keys. When I worked as a security guard in college I was entrusted with keys to everything on campus—women’s residence halls, faculty offices. I could use the college president’s private bathroom at three o’clock in the morning if the notion struck me.

But imagine having the keys of heaven. Jesus hands off those keys to Peter, and to His whole church. You don’t have to hunt for the keys to the kingdom of heaven like you do for your car keys sometimes. No, the keys of the kingdom of heaven are at work right here where Jesus Christ is confessed—right here where sins are confessed and absolved—right here where we preach Christ crucified. “The office of the keys is that special authority which Christ has given to His church on earth to forgive the sins of repentant sinners, but to withhold forgiveness from the unrepentant as long as they do not repent.” These keys are at work for you. Jesus gave them so that you might know for certain that heaven is open to you.

Posted by Pastor Michael Henrichs at 7:31 AM