On the Road to Emmaus

It was a slow, seven-mile slog for two disappointed disciples. They were walking from Jerusalem to Emmaus. It was the afternoon of Easter Sunday. Cleopas and another disciple were heading home after the Passover weekend in Jerusalem. As they 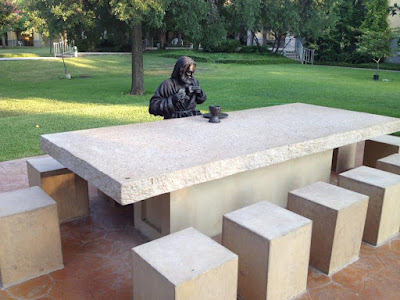 walked, they talked. They discussed what had happened over the past several days concerning Jesus—the arrest, the trial, the crucifixion, the burial. There had also been a strange report from the women that morning that the tomb was open and empty—that there had been an angel or two. But these two men had not seen Jesus; and they didn’t expect to either.

These two disciples had likely staked their lives on this Jesus of Nazareth, just like so many others. They had believed that He was the One: “A prophet, powerful in word and deed before God and all the people.” He made the blind to see, the lame to walk. He raised the dead! They had hoped He was the Messiah, the one who would redeem Israel. But now their hopes had been shattered. Their faith had collapsed like a house of cards. Jesus was dead, and buried, and nowhere to be seen.

The road to Emmaus is filled with disappointment and disillusionment, grief and confusion, bewilderment and sadness. Have you ever been on the road to Emmaus? I suspect that you have. I suspect you know just how those two disciples felt: hopeless, disappointed, and faithless. Things haven’t turned out the way you expected in your life and you’re left to wonder why. You trusted Jesus—you believed in Him—you experienced His power. You staked your life on His life. But now He seems to have fled the scene without a trace. You feel betrayed, used, certainly sad. On the road to Emmaus nobody sees the Savior.

About that time a stranger caught up with them. It was Jesus; but their eyes were kept from recognizing Him. Note that passive verb: their eyes were kept from recognizing Him. It wasn’t because they were so distraught that they didn’t recognize Jesus. It wasn’t that the angle of the afternoon sun hid the Savior’s face or that Jesus had suddenly become a master of disguise. These two men were not permitted to recognize Jesus. His identity was intentionally, divinely concealed from them.

You have to wonder, “Why?” Was this just some cruel trick on the part of Jesus? Why play this little game with two distraught disciples? Why didn’t Jesus just show Himself to these two the way He did to the women and to the Ten, plus Thomas? The two disciples pour out their hearts about Jesus, to Jesus. Jesus patiently listens. He walks with them and talks with them. And then Jesus tells them what they need to hear: They were being “foolish” and “slow of heart.” Foolish as in unbelieving. Slow of heart as in hearts that were hardened to the Word. They knew what Jesus had said so many times about how He would be crucified and rise again on the third day—but they didn’t believe it. They didn’t trust that Jesus would be true to His Word.

That’s us too. We too can hear the good news of Jesus’ resurrection, but then carry on as though nothing of significance had happened. We can hear that sin and death are defeated and still go through our week with grim faces, worn and wearied by guilt, anxiety, and discouragement. We’re just as scared of living as we are of dying. Foolish, faithless, hardened hearts—so slow to believe. Even the strongest of Christians has had this trouble. I’m told that Martin Luther’s wife, Katie, once chiding him by saying, “To look at you you’d never know that Jesus rose from the dead.” You know how it is: You get caught up running on the treadmill of frustrations and failures and worries and the general stupidity of life . . . and you forget that Christ is risen.

The remedy we need is repentance—a repentance that changes slow, hardened hearts into hearts burning brightly with faith in the Risen Christ. That’s eventually what happened for those two disciples on the road to Emmaus. And they’re not so different from us. Because what caused their hearts to burn so brightly with faith and joy wasn’t that they saw Jesus risen from the dead. Note that! They didn’t recognize Jesus until He broke the bread and then immediately disappeared from their sight. They couldn’t see Jesus even when He was walking and talking with them. And this was the Lord’s doing—not their own nearsightedness. Jesus knew He was only going to be visibly present for forty more days. So He had to “wean” His followers from “seeing” Him with their eyes. He had to catechize them to hear His voice in the Word, and to recognize Him in the breaking of the bread.

Beloved in the Lord, this is where your road and the road to Emmaus intersect. We aren’t that different from Cleopas and the other guy. We’ve heard the news that Christ is risen. We’ve read the eyewitness accounts that Jesus is living. But Him we have not seen. Our eyes too are prevented from seeing Jesus. And yet, He is here—quite here, profoundly here, bodily here—here to make your heart and your life burn brightly with resurrection joy by the forgiveness of your sins. The Scriptures tell us plainly that Jesus is here where two or three are gathered in His name. The bread that is His body and the wine that is His blood bear witness to His real presence with us, in us, and for us.

Every Sunday is a “little Easter,” we say. Every Sunday is an Emmaus walk with Jesus—Jesus not seen but heard in the preaching and proclamation of His Word—Jesus not seen but tasted in the Communion meal. Word and Sacrament, we Lutherans say. It’s not a new or novel idea. It’s not something that Martin Luther thought up. It goes all the way back to Easter Sunday and the road to Emmaus.

Each week we walk into this room, sometimes riddled with guilt and our faces downcast and worn with worry. Oh, and if you’re not walking into this room each week then you’d better have a darn good excuse for standing-up the Savior, for refusing His company and His consolation in His Word and in His meal. Worship is not optional in the life of the Christian; it is needed and necessary for faith in Christ, for forgiveness of sins, and for holy living. This is where Jesus comes to join us and to reveal Himself to us. This in-between time—this time between Jesus’ resurrection and your resurrection—it’s not a time for seeing Jesus with our eyes. It is a time for hearing with our ears His Word of life, and receiving with our mouths His body and blood for the forgiveness of sins. Do you want Jesus to walk with you and talk with you and tell you that you are His own? Then you have come to the right place. Just follow the Road to Emmaus.

Posted by Pastor Michael Henrichs at 8:15 AM