Leveled by the Law

Today we are three Sundays into the Sermon on the Mount. And what started off with blessing and benediction has taken a turn into troubling territory. The Sermon on the Mount began with such good news for sinners: Blessed are the poor in spirit. But today we learn just how “poor” we are. Today Jesus unleashes the Law of God in its full fury; and no one is left standing.

The Law of God can make for interesting discussion. To talk about the Law isn’t so bad. We like to engage in all 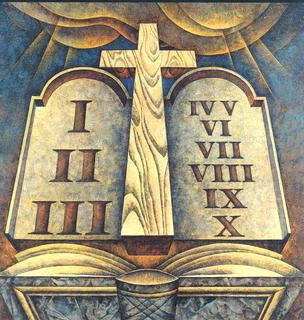 kinds of discussion and debate about what’s right and what’s wrong—about how the fine print might apply in various circumstances and situations. A Bible study on the Ten Commandments is usually much more titillating than a study on Baptism. Why? Because the Commandments highlight who’s naughty and who’s nice (and all the different ways to be naughty and nice). And besides that, studying the Law of God at arm’s length is safe. It’s like encountering a labradoodle on a leash—yeah, sure, she’s got teeth and claws, but she’s not dangerous and she certainly won’t bite you (especially if you’re willing to give her some belly scratches).

This morning Jesus unleashes not a doodle, but a Doberman—a fearsome, fanged beast who just might chew off your right hand or pluck out your right eye, or whatever body parts might be causing you to sin. The Law of God that Jesus lets loose this morning pursues you relentlessly. It always accuses you. It always amplifies and magnifies your sin. It always shatters your excuses and exposes your evil. It uncovers your corruption. It trumpets your transgressions. It never quits picking away at your iniquity. Jesus unleashes the Law this morning in order to drive you to despair of your own goodness and righteousness. And, ultimately, He unleashes His law because He loves you.

“You have heard that it was said.” That’s how Jesus introduces each new topic in this section of His sermon. “You have heard that it was said to those of old, but I say to you.” Here Jesus interprets and proclaims the Law on the basis of His own authority. He doesn’t need footnotes with sources cited. He doesn’t need to list His references. It’s His law and this is how He applies it. He amplifies the Law—turns the volume way up. He takes the focus off of actions and, instead, puts our inner attitudes under the microscope. He gives us the true intention of the Law which, in most cases, was quite different from what the Scribes and Pharisees of Jesus’ day had been teaching.

Take the fifth commandment, for example: You shall not murder. Do you think you’ve kept this commandment because you haven’t plunged a knife into someone, or sent a bullet sailing in someone’s direction, or laced someone’s supper with poison? Think again. You can murder someone in your heart and with your words. Unchecked anger and indulging in bitter insults can just as easily lead you down the road to eternal damnation as can strangling someone with your own bare hands. And it’s an especially serious matter when a disciple of Jesus treats a fellow disciple (a “brother”) in these murderous ways. Repent!

To pretend that you can be in a good relationship with God while, at the same time, refusing to be reconciled with a brother or sister in Christ, is just that—pretending. You cannot love God AND hate your brother. You can’t engage in anger or hatred against someone and think it’s no big deal. And by the way, these rules against hate and insults also do apply to the comments you leave and post on all forms of social media. If anger is your idol—if hatred has hemmed you in—then repent of your idolatry and, yes, your murder. Jesus says, first drop everything, leave your gift in front of the altar, go and be reconciled to your brother; then come and offer your gift to the Lord.

Jesus knows all about the hurt and harm that gets exchanged between brothers. For Jesus came to be your brother. Even as He preached so eloquently against hatred and bitter insults, so did He Himself endure hatred and hear bitter insults hurled at Him. He heard the angry shouts of those who called for His crucifixion. He willingly submitted to the hurt and harm that pierced and lacerated His flesh on Good Friday. Such violence was the payment for your sin. It was the cost that had to be paid to reconcile you with the Father. He did it so that sinners like us could be received and welcomed into the family of God, where all are brothers and sisters—forgiven and forgiving.

Jesus quickly moves on to the sixth commandment: You shall not commit adultery. At first blush that doesn’t sound too difficult. I love my spouse. I haven’t been unfaithful. And then comes Jesus’ “but I say to you.” “Everyone who looks at a woman with lustful intent has already committed adultery with her in his heart.” One stray look will nail you—whether you’re online, or on the beach with bikinis as far as the eye can see. Do you think you’ve kept God’s law because you haven’t taken into your arms someone other than your spouse? Think again. You can commit adultery with your eyes, your brain, your heart. Lust and fantasizing—imagining and envisioning and considering and desiring directed at anyone other than your God-given marriage partner—these all can lead down the road to eternal damnation.

Sins against the sixth commandment have much to do with our bodies—with our eyes, our brains, our hands, our hearts. The dangers of these bodily sins are so great that Jesus uses hyperbole to suggest that a better option might be to cut off our hands or gouge out our eyes. But such an extreme approach forgets something very important: your body is not your own. Your body is a temple of the Holy Spirit—paid for and redeemed with the blood of Jesus, claimed and inhabited by the Holy Spirit in the splash of Holy Baptism, destined for resurrection. As one who follows Jesus in faith, your body is designed to glorify God—to lead a sexually pure and decent life in what you say and do. Living by that Spirit, you can confess your sixth-commandment sins and receive full forgiveness. Jesus bore our every sin in His body, when He suffered on the cross. He refused to divorce His bride, the church, despite our unfaithfulness. He died to rescue us from all the ways we have taken His gift of marriage and used it for our own selfish purposes.

The final topic Jesus takes up today involves swearing and oath-taking. In Jesus’ day the Jews had constructed an elaborate system for taking oaths and making promises. We don’t do so much oath-taking nowadays; but we’re still very good at evading the truth and shading the truth and spinning the truth to our advantage. We’re very good at casting ourselves as the heroes of our narratives. We’re not afraid to re-write and edit the historical record to vindicate ourselves. We’re much more likely to tell half the truth, than to tell the whole truth and nothing but the truth. But Jesus cuts through our hazy cloud of half-truths. He says, “let your ‘yes’ be ‘yes,’ and let your ‘no’ be ‘no.’” Say what you mean. Mean what you say. Keep your promises. Let honesty be your policy.

In this area you can learn much from the God who loves you. He means what He says and says what He means—law and gospel, threats and promises. He tells you the truth in love. His Word is truth. God’s “yes” and God’s “no” are clear and definite. But before this sermon concludes, you need to hear the “yes” of Jesus, spoken to you. For Jesus is God’s ultimate “yes.” In Jesus and His cross God has said yes—yes to your forgiveness, yes to your resurrection. In Jesus, God has said “yes” to your adoption into His family.

The cross of Jesus tells the ultimate truth about us. The cross shows how serious our sin is—how the Law of God levels us all, and leaves no one standing. But even more, the cross shows the magnitude of God’s love for sinners like us. While we were still sinners, Christ died for us. Because of Jesus, because of His suffering, death and resurrection, God says “yes” to you. In your baptism, in the Supper of His body and blood, in holy absolution, God’s yes means yes. In His Law He levels us all. Were He to keep a record of sin no one could stand. But in Jesus God raises those who are knocked down. He lifts those who’ve been leveled. He gives eternal life to all who believe. Amen.

Posted by Pastor Michael Henrichs at 7:24 AM