“This man receives sinners and eats with them.” The Pharisees and the scribes didn’t have any trouble finding things about 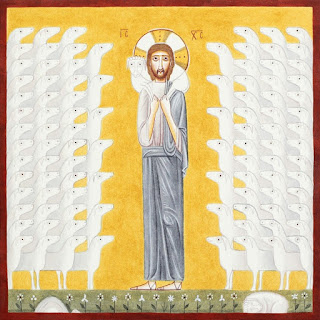 Jesus they didn’t like. They didn’t like His methods or His message. They didn’t like the way He sometimes broke the rules. Nor did they like the loyal following Jesus was creating for Himself. But what really got under their skin—what really annoyed them about Jesus of Nazareth—wasn’t His preaching or His parables. It was the company that He kept. “This man receives sinners and eats with them.”

Jesus had a habit of hanging out with sinners—with people who hadn’t darkened the door of a synagogue for a very long time—people whose situation in life virtually disqualified them from participating in the religious life of God’s people. You know the type—tax collectors and prostitutes—the unclean, the impure, the unholy. But Jesus knew who needed Him the most. Jesus knew that God’s grace doesn’t automatically exclude anybody—no matter how flimsy their religious resume might have been. That’s why this man “receives sinners and eats with them.”

Still today, folks can get uncomfortable when the wrong sort of people start to associate with Jesus. And very often, the people who get the most upset about this are people who never come to church. How often have you heard someone say that they don’t belong to a church because the church is full of hypocrites—because they know the type of people who show up at church on Sunday morning and, it turns out, they’re sinners!—sinners in need of a Savior.

Can you guess what part of the Divine Service is the biggest stumbling block to visitors? What gets people grumbling? What do they have a hard time swallowing and saying? “I, a poor, miserable sinner, confess unto You all my sins and iniquities.” Nothing kills a good religious buzz like admitting the worst about yourself. A lot of people don’t like that. They feel pretty good about themselves. They may sin; but not nearly as much as most other people do. Why go negative with all this “sin talk” when you can accentuate the power of the positive? They don’t need to repent; but they know plenty of other people who do.

Beloved in the Lord, if Jesus receives sinners and eats with sinners, then confessing yourself to be a poor, miserable sinner just might have some merit—and more than a little truth—to it. The Augsburg Confession—already in Article 2—lays out the bad news of original sin—that “all people are full of evil lust and inclinations from their mothers’ wombs and are unable by nature to have true fear of God and true faith in God.” (Stick around for Bible class today to learn more about the Augsburg Confession.)

Or, if the Augsburg Confession doesn’t convince you, then at least take to heart the words of the Apostle Paul in today’s epistle: “The saying is trustworthy and deserving of full acceptance, that Christ Jesus came into the world to save sinners, of whom I am the foremost.” No less than Saint Paul identifies himself as the chief of sinners. And notice that he wrote in the present tense: “sinners, of whom I AM the foremost.” It’s not that he WAS the chief of sinners, back when his name was Saul and he was doing really bad things. No, he, Paul, IS the chief of sinners. And this isn’t some kind of pious humility talking here. For unless you, dear Christian, view yourself as numero uno in the line-up of sinners, you will have no use for the Savior of sinners. It’s as simple as that. But see yourself as the “chief” of sinners and you will enjoy the good company of Jesus. For, you know what they say about Jesus, “This man receives sinners and eats with them.”

Today’s two quick parables begin to express the joy that Jesus derives from seeking sinners, finding sinners, and forgiving sinners. That sounds strange, doesn’t it? In fact, it’s almost as strange as when a shepherd with a hundred sheep loses one, and then leaves the ninety-nine in the open country to go after the one that’s lost until he finds it. Are you kidding me? Who in their right mind leaves ninety-nine valuable sheep to fend for themselves against a pasture full of predators to go off and look for one lost sheep which doesn’t have the good sense to stay with the flock and the shepherd? And then, finding that lost sheep, hoists it on his shoulders, gives it a free ride home, and then throws a party for all his friends and neighbors? Who does that?!

Jesus does that. Jesus gives us a glimpse into heaven: “Just so, I tell you, there will be more joy in heaven over one sinner who repents than over ninety-nine righteous persons who need no repentance.” You know, heaven, as I understand it, is already a place filled to the brim with joy. But the decibel level of that joy gets jacked up significantly when one sinner recognizes her sinfulness and confesses, “I, a poor, miserable sinner.” There’s more joy over someone who simply says, “God, be merciful to me, a sinner,” than over ninety-nine self-righteous, tee-totaling, tattoo-free do-gooders who think they don’t need to repent.

Or how about this one: A woman has ten silver coins and loses one. She turns on the lights, sweeps the whole house, looks under all the couch cushions, moves all the furniture, spends the whole day looking diligently for that one lost coin. And when she finds it she throws a party—a party that probably cost even more than that one lost coin was worth. Who does that? Who drops everything to spend an entire day to look for one lost coin and, after finding it, throws a party for all her friends and neighbors? Who does that?!

Jesus does. And once again He gives us a sneak peak into heaven where angels rejoice over one sinner who repents—one sinner who realizes how lost he is and trusts in Jesus Christ to save him. You once were lost, but now you’ve been found. In fact, I suspect that’s why many of you are here this morning—because God in Christ has found you. He has lifted you up on His shoulders and given you the gift of faith and made you a member of His flock. It happened in Holy Baptism. There at the font the Lord of love picked you up in His gracious arms—up onto His shoulders where there is nothing but safety and security and contentment. The wolf cannot get you there. Death and hell cannot reach you when you’re riding on the shoulders of your shepherd.

You were born into this world a lost sinner. Do you know what it means to be lost? I don’t think people today get lost as much as they used to. If you have a smart phone and a strong enough signal, it’s hard to get completely lost. But it does happen. Several years ago my family flew to Tampa for vacation. Our flight was delayed and it was late at night when we arrived. It got later and darker as we waited and waited for our rental car. We were stressed and weary as we accelerated out of the airport and onto the expressway. The lady in my phone told me to “keep right,” when what she really meant was “exit right.” I didn’t do that. And just like that, we were lost—completely disoriented. We didn’t know what road we were on or what direction we were going, in utter darkness—all while hurtling forward at 70 miles per hour. At least we knew we were lost; but think of all the lost people you know who don’t realize their predicament—who have never even heard the phrase, “I, a poor, miserable sinner.”

For a world full of lost people—for a world of wayward, wandering sheep—Jesus Christ endured the cross, scorning its shame. You were lost in sin and death. So Jesus took your miserable sin—all of it—upon Himself. On the cross, Jesus became the foremost sinner who ever lived—the chief of sinners—the sacrificial lamb of God who takes away the sin of the world. Jesus died and was buried. He was “lost,” we might say; in the same way we say we have “lost” someone when they die. Jesus was lost; He died; He was never coming back. Only He did—on the third day He rose again. And He still lives. And He still takes great joy in seeking and saving lost sinners.

The day will come for you, my friends, when you will begin to feel hopelessly lost—when the wisest doctors and the finest medical care will not be able to rescue you. You will feel yourself slipping away from loved ones and from all that has given you your bearings in this earthly life. But as you close your eyes and breathe your last, you will again know the joy of being found. For the Lord Jesus and His holy angels will come to you. And they will bear you home. How can you be sure? Because Jesus receives sinners and eats with them. Amen.

Posted by Pastor Michael Henrichs at 7:41 AM