The Feast for the Least

This morning we get two party parables from Jesus. The party parables help to dispel all the lame ideas we have about the life of the world to come—such as, heaven being populated by a 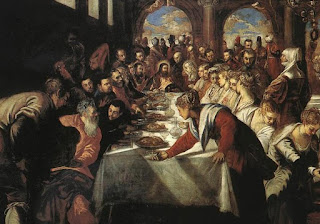 bunch of chubby cherubs sitting around on fluffy clouds strumming harps for all eternity. I honestly don’t know anyone who would look forward to something like that, especially in the younger generation. Some teenagers area actually afraid that heaven will be little more than a Precious Moments collection with really bad music playing in the background. But the party parables invite us to picture heaven as a big dinner party—a wedding feast of fine wines and rich foods. Eating and drinking are the main activities. Eating without the weight gain and drinking without the drunkenness.

Jesus regularly engaged in such eating and drinking, so much so that his enemies labeled Him as a glutton and a drunkard. Jesus regularly sat down to eat and drink with tax collectors, sinners, and others rejected by the ruling religious elites. Jesus would even go so far as to invite His followers to proclaim His death through their participation in a holy meal of bread and wine—bread that is His body and wine that is His blood. The eating and drinking we do in this sacrament of the altar is a foretaste of the feast—a preview of the party—to come.

Jesus told these party parables while He was eating and drinking at the home of a Pharisee, along with other Pharisees and lawyers. It was a Sabbath day. Mix together Jesus with a few Pharisees on a Sabbath day and there’s sure to be fireworks. They were watching Jesus carefully, waiting for Him to slip up somehow. Sure enough, as if on cue, a man with dropsy crashes the dinner party. Jesus heals him and sends him on his way. And while the host is trying to get things back in order, Jesus decides to teach a few things about etiquette in the kingdom of God. And what we get are two party parables about the feast for the least.

Jesus had noticed how all the dinner guests scrambled and elbowed each other to get the best seats next to the host. But Jesus warned them that when you presume to take the place of honor, someone more honorable—more distinguished than you—may show up. And then you get booted out. It’s kind of like at Miller Park when those guys with tickets for the bleachers decide to try and slip into unoccupied seats behind home plate. I’ve never tried that, of course, because it’s a good bet that the ushers will humble you and eject you from your place of pride behind home plate.

That’s what happens when we presume upon God’s mercy—when we act as if God owes us one—when we’re convinced that we belong in the place of honor because of what we’ve done. Far better, says Jesus, to be humble—to start out in the back row—out in the bleachers—among the least and the lowly—and then be honored with an invitation from the host to step on up to one of the luxury boxes. Better to start out in the back row and be invited by grace to move on up.

Now contrary to what most of you Lutherans think, this parable has nothing to do with where you should sit in church—as though snagging one of the back pews makes you more humble and lowly—at least compared to the proud, pretentious types who always gravitate toward the front row like some über-religious version of Bob Eucker in those old commercials, always assuming a spot “in the front row.”

The party parables have nothing to do with pew selection, but everything to do with how we should come into the presence of the living God. We should come here into God’s presence not thoughtlessly or carelessly or casually, but lamenting our sin—like the tax collector in the temple who hung his head and beat his breast, barely able to breathe out a prayer of repentance, “Lord, have mercy on me, a sinner.” We should come here into God’s presence in the footsteps of St. Paul, who wrote to Timothy, “Christ Jesus came into the world to save sinners—of whom I am the worst.” Beloved in the Lord, it’s in that last seat in the back row marked “chief of sinners” that you will find God’s mercy—God’s inviting grace and forgiveness which pulls you onward and upward saying, “Friend, move up higher; come unto me, and I will give you rest.”

Here in the church of Jesus Christ, no one has a right—no one is entitled to anything—not to baptism, not to absolution, not to the body and blood of Jesus, not to eternal life. None of us deserves any of that. Because all of it is a gift—a precious and priceless gift, purchased and won for us by Jesus hanging dead on a cross. The cross is where all talk of what we deserve comes to a screeching halt—and where all talk of grace and gifts and mercies begins. In Philippians chapter two Paul writes that all the baptized have been given the “mind of Christ.” To have the mind of Christ means that we consider others better than ourselves. Having the mind of Christ means that we don’t look down on anyone, no matter how weak or how broken they might be. We are nothing, and Christ is everything.

Jesus is the one who humbled Himself—who did not consider equality with God something to be grasped—but made Himself nothing, taking the very nature of a slave. He humbled Himself and became obedient to death—even death on a cross. In Jesus, the Lord of all creation rolled up His sleeves and became a foot-washing, cross-bearing slave for you. He was executed as your sacred, sin-bearing substitute. It was our sinful pride that pounded the nails that pierced His hands and feet. But as an unmistakable sign of the success of that sacrifice, God the Father exalted Him—highly exalted Him. He approved of His work. He raised Him from the dead, so that one day Jesus might raise you and all those laid low by sin and death.

When you live by faith in Jesus—when by His grace you take up your cross daily and follow Him—you will be humbled. If it hasn’t happened yet, it will. We will be humbled. Our pedestals will be pushed over, our thrones toppled, our egos deflated, our sinful natures crucified. We will be humbled by the Law of God. That Law exposes how helpless we are to save ourselves from the sinful messes we’ve made. That Law drives us down to the grave. There’s nothing more humbling than the grave. Death is the great equalizer: the rich, the poor, the good, the bad—it’s the same for all of us. The wages of sin is death and that’s a payday that none of us can dodge for long.

But God humbles us for our good. He has His reasons. God puts sinners like us in our place . . . precisely so that He might call you up to a better place—right up to the front row of resurrection glory. What a day that will be when Jesus calls you from your grave to join Him on the 50-yardline of the feast for the least—when He says to you, “Friend, move up higher. Come up to the place I have prepared for you since the foundation of the world.”

The second little party parable Jesus tells has to do with the guest list—with who gets invited and welcomed to the feast for the least. Jesus invites us to reflect His generosity by how we select others to serve in His name. The next time you host a luncheon or a backyard barbeque or a dinner party, don’t invite your friends. Don’t invite your relatives. Don’t invite your clients or your rich neighbors to schmooze with. Don’t invite those who will reciprocate quid pro quo. Instead, invite those who will never have the means to repay you—those who can’t give you a thing: the poor, the crippled, the lame, the blind, the disabled. Serve and love those who cannot serve and love you back. That is the mind of Christ, to be sure.

The same thing holds true for this feast we call the Divine Service. Jesus is telling us who we should invite to join us here in the presence of Jesus. And it isn’t just that nice, neat, North Shore family with the above average everything. Who ought we invite to this place? It’s every single person—but especially those who won’t add much to the bottom line, those who won’t pull their own weight, those who might just make things uncomfortable and inconvenient (like that man afflicted with dropsy who crashed a Pharisee’s dinner party seeking the Savior). But the church—like her Lord—never asks what she’s going to get in return. All we do is dish out the invitations to the party, and then wait to see who shows up. When was the last time you invited someone to join you here? In the long history of the church, most converts converted because someone cared enough to invite them to come to church—to come to the feast, to move on up to this holy place where Jesus serves as the Host with the most in this feast for the least.

That’s always how it is with Jesus. Jesus invites and serves those who can’t repay Him. Jesus invites you to hear His Word, to receive His holy meal—to live it up in His lavish grace—knowing full well there’s nothing you can offer Him in return. In the grand scheme of things, we are all beggars, it’s true. Fully aware of that, Jesus invites you anyway. He gives you a front row seat, in the luxury box of His love, and a place of honor at His altar. Amen.

Posted by Pastor Michael Henrichs at 8:32 AM