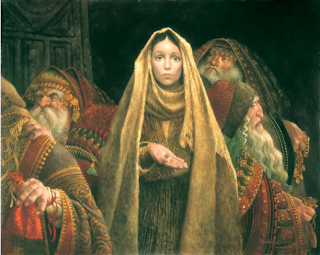 You know about the widow’s mite, don’t you? Today’s message centers on this antiquated coinage; so we’d better be perfectly clear as to what we’re talking about. For people who didn’t grow up hearing the King James Version of the Bible, the widow’s “mite”. . . is a mystery. We could just as well talk about the widow’s ice box, or the widow’s water closet, or the time the widow stepped into a phone booth. Times change. Language changes. The once familiar is now outdated and obsolete. For most of the under-twenty crowd, the only available definition for “mite” (m-i-t-e) is a tiny, biting insect.

So let’s set the record straight: Mite is an old English word for a copper coin. The two copper coins given away by the widow were mites—the most worthless of all coins. It took two mites just to equal one penny. It is a pure coincidence that today there just happens to be a “mite box” in the narthex—because today we recognize the work of the Lutheran Women’s Missionary League. For longer than most of us have been alive, these Lutheran women have been hoarding their pennies, nickels and dimes, faithfully filling their own personal mite boxes with these nearly worthless coins. But from these meager mites Christian missions have been fueled and funded, the Word of God has been proclaimed, and the Savior’s love has been shared in Word and deed around the world. Through these mites, the LWML has been busy nickeling and diming the world to life.

In today’s Holy Gospel Jesus does two things: He warns his disciples about the scribes, and He commends and memorializes a widow’s penny-sized offering. “Beware of the scribes,” Jesus warned. They like to put on a show with their pretend piety. And they like to prey on gullible, rich widows. Then along came a poor widow with her mite-sized offering. She didn’t put on a show. And the little she gave was all she had to live on. At the temple, they didn’t use offering plates. No, there were thirteen offering boxes made of metal. The tops of these money boxes were shaped like the bell of a horn. And as coins were dropped into these metallic money boxes, the sound of money on metal reverberated throughout the temple courtyard. When the rich emptied their money bags, everyone heard it. Everyone noticed. Everyone turned and looked. But the plink, plink of the poor widow’s coins were almost inaudible. No one noticed her meager gift—no one, that is, but Jesus. For Jesus always notices what we do not notice. Faith always gets His attention.

It would be easy enough to make a two part sermon out of this text: Part One: Don’t be like the scribes. Part Two: Be like the widow. She gave one hundred percent and so should you. But that’s not exactly what Jesus is teaching in this passage. So let’s aim for a slightly different angle.

Beware of the scribes, Jesus warns, because they are everything the poor widow is not. For they love attention; they love applause; they love the places of honor; and even though they blush with fake humility, yet in their heart of hearts they love living in the limelight. Yes, beware of the scribes, for the scribes are in you and me. If only we could see it as clearly in ourselves as we can see it in other people. Some of you are old enough to recall a time when it was the practice of many congregations to post publicly the annual offering amount given by each member. I can’t think of a better, more efficient way to turn a family of believers into a den of scribes, each person jealous of those who gave more and judgmental of those who gave less. What a breeding ground for pride and prejudice. We really have no business looking at how much others give or don’t give; but we ought to carefully examine what we give—and why we give what we give.

Jesus certainly notices the offerings we give. After all, He noticed the widow’s offering; and He is the intended recipient of every offering we give. So now let’s consider the widow and the gift she gave. From a worldly standpoint, the widow’s offering did not matter. Those two copper coins comprised an offering so small that it almost wasn’t worth counting. The widow’s offering would do nothing to pay down the temple debt. It would not impact work on the mission field. It fed no hungry, clothed no poor, paid no utility bill. To the eyes of the world, that widow’s offering was probably the least significant thing that transpired that day at the temple.

But to the eyes of Jesus, who sees deep into the heart—that poor widow’s penny-sized offering was worth more than all the gold in King Herod’s treasury. Jesus said that this poor widow had given more—more than all the others who gave out of their abundance. For she, out of her poverty, gave everything she had. The wealthy put in large amounts to be sure; but even larger amounts remained in their pockets. The widow put in a microscopic amount; but the amount that remained in her purse was zero. Her gift totaled one hundred percent.

And a quick reminder about widows in Jesus’ day: Most of them were not "merry" widows, living large on their husband’s pensions and life insurance policies. Nor were they enjoying even the modest benefits of social security, Medicare or Medicaid. No, most of them, like this widow, had only pennies to their name. And did you notice that Jesus calls her “poor,” but nowhere is she called “old” or “elderly?” I noticed that when I was viewing how artists and painters have depicted this widow down through the ages. I was shocked to see several paintings where the widow wasn’t old and gray, but very young, and some depictions had her even holding a baby on her hip while also holding a toddler’s hand. And actually, for those times, a young widow was probably almost as common as an older widow. How does it change your understanding of this passage to see the widow as a twenty-year-old mother of little ones, and not as an aging octogenarian?

This account doesn’t give us the whole story of stewardship, but it does teach us a few crucially important points. Jesus notices what we do not notice. He noticed the widow’s offering. He notices your offering. He notices the offerings given by teens, and by pre-teens and even the kindergarten crowd. And it’s not unheard of for someone in that crowd occasionally to give a few pennies for Jesus—often in a carefully folded envelope, maybe with a unicorn sticker attached for good measure. But make no mistake, those pennies are precious to Jesus. And if we don’t teach our children about this grace of giving, they will never learn it from anyone else.

Or consider the other widow we heard about today—the widow of Zarephath. The Lord directed Elijah to go to her for food because there was a terrible famine in the land. Elijah must have assumed that this was going to be a widow of means—the Jackie Onasis of widows. Turns out she and her son were destitute. Their kitchen cabinets contained nothing but a little flour and a little oil. But by the grace of God (who loves especially the widow and the fatherless), the oil and the flour did not run out. There was always enough. There was always more. The Lord always provides. You know that too. You believe that too. “He who did not spare His own Son, but gave Him up for us all—how will He not also . . . graciously give us all things” (Rom. 8:32)? And the offering you give is a chance to show that you believe it—that with our gracious God, there is always more, always enough, always abundance. The Lord always provides.

These widows show us what faith looks like. But it would be a mistake to see these two widows merely as teachers of the law. That dear widow with her two mites wasn’t merely singled out by Jesus to show us what do do—or just to make us feel guilty about the offerings we give. No, this dear widow is showing us the Savior—pointing ahead to the crucifixion cross of Jesus—to the greatest offering ever given in the history of the world. This widow gave everything—all she had—in an act of pure love and devotion. Her pennies preach a sermon more powerful than any preacher could ever proclaim. For just as she gave away all she had, so Jesus gave all He had for you on Calvary’s cross. Only there was not the plink, plink of gold or silver coins, but only the steady dripping of His life’s blood, for your sin, securing your salvation, cleansing you from every stain. Jesus gave away all He had and all He was for you. He held nothing back as your sacred substitute.

That offering—the offering given by Jesus on Good Friday—that offering makes you rich. By faith in Jesus, you enjoy the riches of God’s grace, forgiveness for your sins, comfort in your sorrow, peace that passes understanding. Today you are invited to an extravagant meal that money can’t buy. On the menu is the body and blood of Jesus, shed for you, for the forgiveness of sins. Unlike any other meal, we come to this meal with empty pockets, empty hands, empty hearts. And Jesus fills us with His very life.

We trust Jesus with the big things—forgiveness, salvation, the life everlasting. Why not also trust Him with the small things? Why not trust Him with our coins and currency? Sometimes the oil and flour may run low. Sometimes your account balance might not register much more than the widow’s two mites. But you are never outside the Lord’s notice—never beyond the reach of His care and His love. He will never leave you or forsake you. “Let not your hearts be troubled,” He says. Seek first His kingdom and His righteousness, and He will take care of everything else. Amen.

Posted by Pastor Michael Henrichs at 7:51 AM