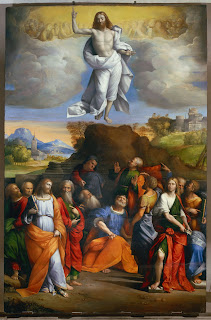 Today’s reading from Acts chapter one places us squarely in the middle of chaos. Jesus had ascended into heaven, leaving behind a rag-tag band of disciples totaling about 120. And the outpouring of the Holy Spirit on the Day of Pentecost hadn’t yet taken place. If ever there was a teachable moment in the life of the church, this was it.

The days right after the Ascension of Jesus were a teachable moment for the church—and for us—on at least two counts. The first is nicely illustrated by the cover art on today’s bulletin. Take just a minute to pull out your bulletin and take another look at that portrait of the ascension. The focal point of the painting, of course, is Jesus—the risen, ascending, living Lord—Son of God and Son of Man. He was crucified, died, and was buried. But on the third day He rose again. And for forty days the risen Christ appeared among His disciples, speaking about the kingdom of God. The hearts of all the believers were steadfastly united by faith in this Jesus. Every last one of them believed that in Jesus they had forgiveness of sins and eternal life.

But beyond that belief is right where the unity ended. That’s where the solidarity stopped. For take another look at the bulletin cover; and this time focus on the believers at the bottom of the painting. There you see utter confusion and disagreement. For each one of the believers is looking in a different direction, pointing in a different direction, assuming different postures and perspectives—a far cry from the neatly ordered, carefully spaced pews into which all of you are organized this morning.

Beloved in the Lord, what you see right there is a teachable moment—a moment that would be replayed in the life of the church over and over again, to this very day. For what unites the church is always invisible and unseen. What unites believers is faith in Jesus Christ; and you can’t see Jesus or faith in Jesus. What you do see a lot of in the church is what’s depicted in this painting—a lot of confusion, chaos, and disagreement. They were united in faith and doctrine; but beyond that, they didn’t see eye to eye on much else. Still today in the church you see people with different ideas, different perspectives, different visions for how the church should carry out her mission to make disciples of all nations. If you don’t know what I’m talking about then you probably haven’t attended many church conventions or voters’ meetings—or many call meetings—during your life.

This moment in the life of the church—the moment after Jesus’ ascension—is a teachable moment because it teaches us how to live together in peace even when we disagree with one another. It’s also a teachable moment because of something that you don’t see on the bulletin cover—or more accurately, because of someone you don’t see depicted. Judas was dead. Judas, who had been a trusted member of their fellowship for three years, had taken his own life. And the circumstances that led to his suicide centered on his betrayal of Jesus. There is terrible emotional trauma in the wake of every suicide—but especially that of a trusted brother in the faith whose most notorious act had been one of betrayal—a slap in the face disguised by a kiss. How would the tiny church react when one of their own had caused such trauma and so much disappointment?

And so this text is a teachable moment on two counts: What do you do when you can’t agree with your fellow believers? And what do you do when a fellow believer acts in a way that hurts and disappoints you? You know what comes naturally, don’t you? Whenever Christians can’t agree about some aspect of their life together it’s natural to get defensive, to get aggressive, to try and get your way through sharp and forceful words. It’s natural to demonize the opposition—to recruit allies and choose sides—to make those who disagree with you look bad. If we can’t agree, then I’ll be disagreeable. You don’t need me to tell you that the devil does some of his best work in these kinds of situations. For I’m sure you’ve heard about congregations that split up over the color of the carpeting, over money issues, over music issues, over a my-way-or-the-highway mentality that has no place in the church of Jesus Christ.

Beloved in the Lord, there’s a better way. There will always be disagreements among believers in the church. There will always be fellow Christians who disappoint you and cause trauma to the body of Christ. The church is made up of poor, miserable sinners; but that can never be an excuse to demonize the one you disagree with—to hurt others as you have been hurt—to fan the flames of disagreement into a scorched-earth battle against your brothers and sisters in Christ.

There’s a better way—a better way taught for us today by Peter and the little band of believers who were traumatized by Judas, each with a different vision for where to go and what to do. It was a teachable moment for them and for us.

First, they didn’t let the death of Judas distract them from the life and resurrection of Jesus. Nor did they allow their differences and disagreements to distract them from the joyful unity that they shared through their common faith in Jesus. They recognized that all of them were witnesses of Jesus’ resurrection. They had seen and touched and heard the resurrected Jesus. Because He lived, they knew what was in store for them. Because Jesus was alive, they could live each day in hope and expectation. Jesus was more important than their disagreements and disappointments. His death and resurrection were at the heart and center of life for those first believers, just as Jesus is at the heart of everything for the believers here at Our Savior. In Jesus, we are one, made holy by the truth of God’s Word. In Jesus we have the forgiveness of our sins and the power to love one another as He has loved us. He is the vine and we are His living branches.

It’s the same reason we gather right here, in this sacred space, week after week, time and time again. Here we gather to pray to Jesus, in the glad confidence that He is still praying and interceding for us. Here Jesus still washes His disciples, in the waters of Holy Baptism. Here Jesus is the host, serving us with His precious body and blood that He might lead us onward in faith toward Him and in fervent love toward one another. This is the place were disagreements are dissolved, where unity is preserved, where forgiveness is offered and received.

Those first believers also teach us today that Jesus is at work among us, despite our troubles, our traumas, and disagreements. The work goes on! For it always surprises me that even in the midst of their chaos and uncertainty, Peter turned to the Scriptures. And from the Scriptures he concluded that they needed to have a call meeting—that the Lord needed to select a new apostle to take the place of Judas. They prayed. They cast lots. And the Lord chose Matthias to be apostle number twelve. And we never hear another word about good old Matthias ever again.

Someone has pointed out that the name Matthias sounds a lot like the Greek word for “disciple,” which is “ma-thay-tase.” And you’d have to agree that Matthias and “ma-thay-tase” do sound similar. Perhaps the reason we don’t hear more about Matthias is because he stands for all the disciples that would come after him, all the believers including all of us gathered here at Our Savior this morning. His story is our story. The unfinished work of making disciples continues to be unfinished. Our work is not yet done.

But that work is being done. For the Lord Jesus is at work among us and through us. He brings order out of our sinful chaos. He brings peace and healing to each one of us. Our lives are filled with teachable moments from Jesus every day. From the Father’s right hand Jesus is working all things for your eternal good, and for the blessing of His church, until He comes again in glory. Amen.
Posted by Pastor Michael Henrichs at 11:44 AM