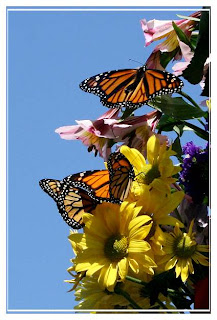 Christ is risen! He is risen indeed! Alleluia! It feels good to shout that again, doesn’t it? After forty days of Lent with stifled alleluias and subdued praises, it feels good to pull out all the stops, to sound the trumpets, and pump up the volume on the incredible good news that Jesus Christ is risen from the dead. Death has lost its sting. The grave has lost its grip on you. Death, your greatest enemy, has been defeated single-handedly by the Son of God who was crucified, died and was buried . . . and on the third day rose again from the dead.

But for the next few minutes I want you to consider the good news of the resurrection from a quieter, more serene perspective. I want you to think about butterflies. Butterflies have long been a symbol of the resurrection. The metamorphosis from caterpillar to cocoon to the colorful winged creatures we know and love—that’s creation’s quiet testimony to the resurrection of the body and the new life we have in Jesus. His tomb was nothing more than a cocoon. The grave could not hold Jesus, and it cannot hold you either.

You know about butterflies; but do you know about the “butterfly effect?” The butterfly effect is actually a scientific theory which proposes that a very small change at one place within a system results in big changes at a later state. One tiny change now; big changes later. It’s called the butterfly effect because of the theoretical example of a butterfly flapping its wings. The idea is that the movement of the butterfly’s wings creates a tiny change in the atmosphere—a change that may ultimately result in the formation of a hurricane, or perhaps impact the path of a tornado, several weeks into the future. The butterfly’s flapping wings introduce a tiny change to the atmospheric system, which causes a chain of events leading to a large scale alteration of events. Had the butterfly not flapped its wings, the outcome might have been far different.

The butterfly effect is a common motif found in books and stories about time travel. Earlier this year I read a best-seller about a man who travelled back in time in an attempt to prevent the assassination of President Kennedy in 1963. His hope was that by saving Kennedy, the resulting butterfly effect would prevent the other assassinations and bloodshed that marred the 1960s. Now, spoiler alert: In the book, the protagonist ultimately saved Kennedy’s life, but the resulting butterfly effect turned out to be a much darker and more dismal result than what we read about in the history books today.

While I was reading that book it struck me that the butterfly effect could be a great device for proclaiming the reason for the season which begins today. The story of our salvation is nicely illustrated by this butterfly effect—one tiny change, resulting in cataclysmic change.

So let’s travel back through time, back to paradise—back to the perfect world God created. And the crowning achievement of this creation was a man and a woman, made in the image of God. That doesn’t mean that Adam and Eve looked like God. It means something better. To have the image of God in them meant that they knew God perfectly. They were perfectly happy in Him. The relationship between the Creator and His creatures was open, honest and loving.

Then, one day, there was a tiny change to that perfect world. The tempter persuaded the man and the woman to disobey God—to rebel against His rule. They consumed the forbidden fruit. At first, nothing bad happened. Oh, sure, they felt shame for the first time. They felt a bit chilly when they realized they were naked. But they were still living and breathing. The sky wasn’t falling. But make no mistake, the butterfly had flapped its wings. Or, as it says in Romans 5: “Therefore, just as sin entered the world through one man, and death through sin, . . . in this way death came to all men, because all sinned.” From that one, small act of disobedience, the creation was forever altered in increasingly horrific ways. Idolatry and adultery, murder and mayhem, death and destruction, obituaries and cemeteries are but some of the awful, cataclysmic changes that resulted from that second of time.

You and I are also caught in this butterfly effect of sin. But we’re not passive victims in creation’s push to devolve. For we take after our first parents. We are all too ready to bite the loving hand that feeds us, and to rise up in rebellion against God and His Word and His Law. At least Adam and Eve blushed with shame at what they had done. We manage to sin with impunity. And every day we set ourselves up as gods in the place of God. We determine what’s right and wrong for us. We declare ourselves to be innocent and good, pretending that we have no need of rescue from the death we face. We are trapped in the butterfly effect of sin, set in motion by our first parents.

But now let’s re-set our time machine, and travel to another destination in time. Let’s travel back two thousand years to a rocky hill outside the city gates of Jerusalem. It’s a place of execution. Golgotha. The place of the skull. Three convicted criminals have been crucified. Three men are dying an awful death on a Roman tool of torture. But the man in the middle is different. On the center cross hangs the Christ. He has done nothing wrong; in fact, He has done everything right. But His perfect record of obedience cannot help Him now; for He bears your sin. Your rebellion, your idolatry, the murderous mayhem you have perpetrated—it has all been laid upon Him. He bears your sin. He receives your punishment. He suffers hell as He hangs there. And right before He dies He declares, “It is finished.” He breathed His last—exhaled for the final time. And that dying breath—that final gasp—was something like the gentle breeze of a butterfly’s wings.

From the cross a new breeze began to blow. A new butterfly effect was set in motion. “Consequently, just as the result of one trespass was condemnation for all men, so also the result of one act of righteousness was justification that brings life for all men. For just as through the disobedience of the one man the many were made sinners, so also through the obedience of the one man the many will be made righteous” (Rom. 5:18-19). On Good Friday, in Jesus, your sin was paid for, your forgiveness was purchased, and only one thing remained to be done.

Fast forward three days to a Sunday morning like this one. Witness the women just after sunrise, headed to the tomb of Jesus. They were expecting to find His corpse; but when they arrived they found that the stone had been rolled away, and an angel met them in the empty tomb and declared of Jesus, “He has risen.” And in St. Mark’s lean, streamlined account of the resurrection, the women immediately flee the tomb, seized by trembling and astonishment, and they don’t say anything to anyone because they are afraid. The resurrected Jesus doesn’t even put in a cameo appearance in today’s holy gospel according to St. Mark. There’s just an angel, an empty tomb, and some terrified women. And, oh yes, one other thing: a butterfly flapping its wings.

One small, tiny change to the system took place that morning. The empty lungs of Jesus drew a breath. A stilled heart began to beat. Lifeless eyes were opened to see again. Muscles moved. The stone was rolled away. And death was undone. The living, resurrected Christ walked out of His tomb. He is risen; and in Him you too will rise. Because He lives, you shall live also.

The Easter story began as just a whisper—nothing more than the quiet beating of a butterfly’s wings. But what happened that morning is now the beating heart of all our hope and joy. The butterfly effect set in motion by the sin of Adam and Eve has been overcome by the butterfly effect set in motion by the resurrection of Jesus from the dead. St. Paul connects the dots wonderfully in 1 Corinthians 15, “For since death came through a man,” he writes, “the resurrection of the dead comes also through a man. For as in Adam all die, so in Christ all will be made alive. Christ, the firstfruits; then, when He comes, those who belong to Him.”

Beloved in the Lord, you are among those who belong to Jesus. Your resurrection, your heavenly homecoming is already in the works. But the promise of the resurrection isn’t just something to wait around for. For the butterfly effect created by the resurrection is something that grows bigger and stronger with every passing day. The butterfly effect has effects in your life today—here and now. It changes you! It means, of course, that you don’t have to be afraid to die; but it also means that you don’t have to be afraid to live, either! For the God who gives resurrection life can certainly supply your life with whatever you need in the here and now.

Your life has eternal significance. Your words and your deeds are producing new butterfly effects every day. What you do and say changes things forever. When you tell the good news about Jesus, when you give an offering, when you show love and mercy and compassion to others—you are changing the world. The system will never be the same because of you—because of who you are in Jesus, a child of God.

Although Spring has sprung early this year, I think it’s still too early for butterflies. But I suspect you’ll see one soon. And when you do, remember the joy of Easter. Remember the butterfly effect. Remember that Christ is risen. He is risen indeed. Alleluia! Amen.
Posted by Pastor Michael Henrichs at 7:46 AM