Some Straight Talk about Death and Life 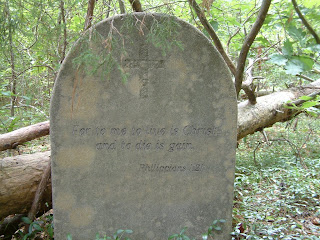 The four-word epitaph on the cover of today’s bulletin is one of the most hard-to-swallow phrases in all the Scriptures: “To die is gain.” It makes for a great epitaph. And those four words are the Word of the Lord. But . . . do we believe them—we who have watched loved ones die—we who have had loved ones suddenly snatched away from life to death? Do we believe that “to die . . . is gain?”

Now, before we go any further, let’s be clear on one thing. The Bible doesn’t say, “Death is good.” Nor does the Bible say that death is a natural part of the circle of life. That is not the Word of the Lord. God’s Word tells us that death is the wages of our sin. Death is the final “enemy” that God sent His Son to destroy. When God created the heavens and the earth and after six days declared that everything was “very good,” death was not part of that picture. So let’s not pretend (and don’t you hear me saying) that death is a good thing. But do—do hear the Word of the Lord: “To die is gain.”

It takes a lot of effort just to talk about death. It’s such an unpleasant subject that people generally try to avoid it. Our culture denies death. It’s difficult even for us simply to say that so-and-so died. We prefer the euphemisms (and there are so many to choose from): “He passed away, he passed on, expired, kicked the bucket, bought the farm, bit the dust, met his Maker.” And the list goes on and on. Euphemisms about death aren’t a bad thing. They afford a gentler way to broach a difficult subject.

In fact, St. Paul employed a euphemism to describe death in today’s reading from Philippians. When Paul wrote these words to the church at Philippi, things were not going well for him. He wasn’t preaching to packed pews. Nor was he out planting new congregations and winning new converts. He was in prison. His future was uncertain and grim. But to hear Paul describe his situation, you’d think that he had nothing but good options and pleasant possibilities on the horizon: “I eagerly expect,” he wrote, “that Christ will be exalted in my body, whether by life or by death. For to me, to live is Christ and to die is gain. If I am to go on living in the body, this will mean fruitful labor for me. Yet what shall I choose? I do not know! I am torn between the two: I desire to depart and be with Christ, which is better by far; but it is more necessary for you that I remain in the body.”

Did you catch the euphemism? Paul didn’t say, “I desire to die.” What he said was, “I desire to depart and be with Christ.” Now, there’s a euphemism that tells it like it is. There’s good news in that description of death. Straight talk about death never sounded so good. I desire to depart and be with Christ, which is better by far. Beloved in the Lord, you could read a hundred books on death and dying—you could digest a dozen best-sellers by people claiming to have been to heaven and back again. But here in the pages of your New Testament is the heart of what you need to know about death and dying.

What happens when you die? Here’s what happens when you die: You will be immediately with Christ. You will stand in the Savior’s presence. You will not be alone. You will not be afraid. You will not be asleep. “Sleep” is another euphemism for death that you sometimes find in the Scriptures. And based on that, some Christians have mistakenly concluded that at death the soul just goes to sleep—a kind of holy hibernation—until the day of resurrection. But it ain’t so; for the Bible tells us otherwise. When we depart this life—when we die—we are immediately with Christ. And with Christ, you will lack nothing. You will have everything—far more than you deserve and more than you can even desire. (Even the body you temporarily leave behind is destined to be raised, resurrected and glorified.) And this is why. This is why Paul could write those four little words that sound so foreign—so alien—to our usual way of thinking: “To die is gain.”

Do you believe it? And if you believe it today, will you also believe it in your last days, your last hours and minutes? Many of us, I think it’s safe to say, fear dying. And I think it’s more than just the fear of the unknown. I think we fear death because death is a reminder of our sin. “The wages of sin is death.” “The soul that sins will die.” And when it comes to sin, we each have a record that runs long and deep: the good things we have failed to do and the bad things we have so eagerly engaged in. Over the years, it adds up. And the dying person can no longer hide from that sobering reality of sin.

But you don’t have to hide! Jesus came to save you from that sobering reality of sin. He came into the world to save sinners. For this very reason, Jesus was born of the Virgin Mary, suffered under Pontius Pilate, was crucified, died and was buried. Jesus took your sins all the way to His tomb. He was your stand-in beneath the wrath of God—your sacred substitute. He confronted death head-on, and by His resurrection Jesus defeated that terrifying enemy. Death couldn’t hold on to Jesus and it won’t hold onto you either. For you, death is just a doorway. Depart through that doorway and you will be with Christ.

And this is why we believe those four little words: “to die is gain.” So often when a loved ones dies, the comfort we speak centers on all the bad things that the deceased no longer has to deal with. And it is comforting to realize that there’s no more pain, no more suffering, no more tears, no more sinning. But don’t stop there. Dying isn’t just leaving the bad stuff behind. It is gain. It is receiving—receiving the fullness of all that our God has to give.

And while I’d love to go into great detail about all of that, I can’t. For the Bible also tells us this about the life of the world to come: “No eye has seen, no ear has heard, no mind has conceived what God has prepared for those who love him” (1 Cor. 2:9). Don’t base your hopes for the afterlife on human authors who claim to have been there and back again. Don’t even set your sights on streets of gold or pearly gates. Don’t imagine halos and harps on fluffy white clouds. Think Jesus. You will be with Him. You will see Him as He is—true God and true man. He loves you and He’s got the scars to prove it. In Him is life and forgiveness and peace that passes understanding. To die is gain.

Do you believe that? If you do, then I’m sure that you will want the people who come to your funeral to know that too—that in Christ, “to die is gain.” Have you given any thought to your funeral? I don’t mean, have you put down a deposit at the funeral home? I mean, have you considered what Scripture, what hymns, what music you want to bear witness to the hope that you have in Christ? I hope you’ll have your funeral here, and not in the fake, sterile serenity of the funeral home. I hope that you’ll choose readings and hymns and music that trumpet your faith in Christ—texts that boldly proclaim your belief in the resurrection of the body and the life of the world to come—instead of readings and music better suited for soft weeping into a lace hanky of hopelessness. Not sure? Then let me make some suggestions for you to pick from. Then write it down and give a copy to me. We’ll give you a send-off fit for a saint—for one redeemed by Christ the crucified.

This is also why we Christians attend funerals. When a brother or sister in Christ dies, it’s easy to say, “I didn’t know him or her very well. I don’t think I’ll go to the funeral.” Beloved in the Lord, not true! You are more deeply united to the people gathered here in this fellowship than to any other people on earth. If you can kneel next to someone at the altar and share together in the gifts of Christ, then you share a holy bond that cannot be broken. And your voice is needed at the funeral to help proclaim and sing to any and all in attendance that, because Jesus Christ has destroyed death, “to die is gain.”

But as for you, you’re not dead yet, are you? You’re still alive and kicking—still quick and not dead. And I can’t let you go without giving good news for this day and this hour. To die is gain, it’s true. You can look forward to that. But it’s also true that to live is Christ. Your daily labor is not in vain. The work of your vocations, your labor in the Lord’s vineyard here, your successes and your failures—in all the humdrum, everyday stuff you do, you are not alone. Here and now, Christ is exalted in you—in your body, in your works, in your words and deeds. To live is Christ. Here and now—is Christ. You have the power of His promises preached and proclaimed. You have His forgiveness. You have His body and blood. Your body is a temple of His Holy Spirit.

You, like Paul, have nothing but good options. Whether you are at the top of your game or locked up in prison, (or even dying) you can’t go wrong. For . . . to live is Christ and to die is gain. Amen.
Posted by Pastor Michael Henrichs at 8:38 AM