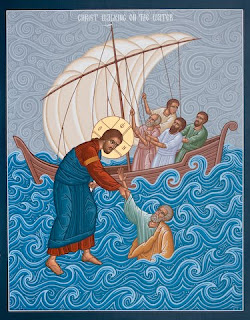 Jesus walking on the water—and Peter joining Jesus on those waves in the nighttime darkness—has got to be one of the most memorable scenes in all of Scripture. But before we go any deeper, we need to highlight a few facts about this amazing scene. First, you need to know that the wind and waves were not a life-threatening problem that night. Yes, the wind was strong and the waves were a force to be reckoned with; but there’s no hint in the text that the disciples’ boat was in any danger of sinking. It’s nothing like that time when Jesus was in the boat sleeping as the disciples were on deck preparing to abandon ship. Only the words of Jesus, “Peace, be still!” were able to keep their boat afloat that night. But their boat was certainly not sinking on this night.

The second thing we need to get straight is that Peter’s words and actions demonstrate foolishness, not faith. The “moral” of this account isn’t “be bold and courageous like Peter.” At no point does Jesus say, “I’m so proud of you, Peter, for boldly stepping out of the boat.” We never hear, “Blessed are you, Peter, for being so gutsy.” There’s not even an “atta’ boy” or a “You da’ man!” Peter stepped out of the boat because he lacked faith—because He doubted Jesus—not because he had great faith. In fact, remember what Jesus said to Peter when it was all said and done: “O you of little faith, why did you doubt?”

To put it bluntly, the problem in this whole scene is Jesus! Jesus is the one who suspends the laws of physics so that He can catch up with His disciples. Jesus is the one who triggers the terror. Jesus facilitates the fear. Jesus is the one who dances on top of the deep waters as though He owned them and managed them. Jesus—not-so-subtly and without warning—gives an unforgettable late-night lesson that He is the Lord of all creation.

The disciples were afraid, and rightly so. Fear is a natural reaction when our safety and security appears to be threatened. Had you or I been on the boat that night, I don’t think we would have reacted much differently. Perhaps we’re not as superstitious. Perhaps we wouldn’t have assumed we were seeing a ghost. But the sight of Jesus walking on the water would surely make us afraid too. The fear of uncertainty. The fear of the unknown. It’s the same fear we have when waiting for the results of medical tests. It’s the fear of knowing that you aren’t in control—that what happens next is entirely in the hands of someone else. We know that fear.

But those words of Jesus were apparently not enough for Peter. Peter needed something more before He would trust and believe that the midnight water-walker was Jesus. “Lord, if it is you, command me to come to you on the water.” Peter wants proof. Peter wants more than words. The same Peter who doubts the words of Jesus is now making demands on Jesus. Show me. Prove it. “I double-dog dare you to let me waltz on the waves too—if you are who you say you are.” Those aren’t words of faith. Those are words of weakness.

Amazingly, Jesus responds to poor Peter with one simple, unexpected, undeserved word: “Come.” And with that one word ringing in his ears, Peter did what no mortal man had ever done before or since. He walked ON the water. He defied the immutable laws of physics. He didn’t sink! How can Peter do such great things? Well, it wasn’t Peter, but the Word of God, that did this great thing. Peter shares in this miracle because Jesus simply said the word, “Come.” When Jesus first spoke, Peter didn’t believe it. When Jesus said, “It is I,” Peter said, “I’m not so sure.” But now, standing on the waves, the message is unmistakable: When you are afraid—when you are threatened by things beyond your control—when fear has wrapped its coils tightly around you—when you have doubt and despair—you can trust the Words and promises of Jesus Christ, come hell or high water. When Jesus says, “Do not be afraid,” you can let go. You can know the peace of God that surpasses all understanding. You can take Jesus at His Word.

But poor Peter. Even after he got what he asked for—even after doing what no mortal man had ever done—he doubted yet again. He saw the wind. He saw the waves. He forgot about the Word of Jesus. And he started to sink like a stone. That’s our problem too. One pastor I know has called it “spiritual ADD—attention deficit disorder.” Our attention quickly shifts away from Jesus and His Words to all the dangers, toils and snares that surround us. Our little faith won’t focus firmly on Jesus, but is always distracted—always bouncing from one threat to the next, and before long we start to sink. We’re in over our head. And there’s only one thing left to do . . . .

“Lord, save me.” That’s what Peter screamed as he sank. Peter deserved no rescue, and neither have we. Peter doubted, and so do we. Peter didn’t take Jesus at His Word, and neither have we. Peter’s sin is our sin too. But Peter’s rescue is also our rescue. Jesus doesn’t let Peter get what he deserves; and you don’t get what you deserve either. No, it’s like we heard from Romans chapter ten today: “Everyone who calls on the name of the Lord will be saved.” Everyone who cries out in faith, “Lord, save me,” (even if it’s just a little faith like Peter’s) will be saved.

Jesus can and will save you—despite your little faith and despite your doubts. Jesus took your sin. Jesus took your doubt. Jesus died in your place so that you won’t get the punishment you deserve. Jesus is now the resurrected Lord of life. All authority in heaven and on earth has been given to Him. He has destroyed death and everything else that threatens to destroy us. In Jesus you will not sink, but you will rise to live with Him on high.

Nothing can separate you from His love—not even the laws of physics! And speaking of the laws of physics, are you prepared to see them broken again today? For the same Jesus who defied the laws of the natural world by walking on water defies those same natural laws every time we gather here. Jesus isn’t walking on water today; that wouldn’t do anybody any good. But the living Christ is here in the bread that is His body and in the wine that is His blood. Every Lord’s Day in every Lord’s Supper, the Lord Himself is present: “This is my body. This is my blood,” He says. When you come to Communion today, here Jesus says to you what he spoke to that boatload of fearful disciples: “Take heart; it is I. Do not be afraid. Your sins are forgiven. I have come to save you.”

This is Jesus--our Savior. He is among us here to save us. Our work is now simply to worship Him and confess His holy name. That’s what the disciples did after Jesus and Peter rejoined them in the boat. “Truly you are the Son of God,” they confessed. That scene is a picture you and me here this morning. We’re in the boat with Jesus. The space where you’re seated is called the nave. Nave is the Latin word for “boat.” You are in the boat with Jesus. Our job isn’t to walk on water, but to make room for more souls in the boat—in the church—with Jesus. There is no better place to be. And by faith in Jesus you have a place in this sailing ship, and a guaranteed safe arrival in the life of the world to come. Amen.

Posted by Pastor Michael Henrichs at 7:42 AM