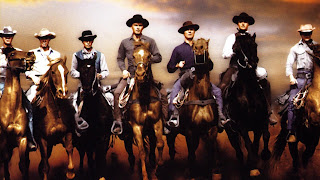 When it comes to your New Testament knowledge, I’m sure you know something about Peter and Paul. You probably know about James and John. You might even be able to say a bit about Andrew or Thomas. But do you know about Nicanor (nai-KAY-nor) and Nicolas? What can you tell me about Timon (TAI-mon) and Philip? Would you be pleased to report on Procorus and Parmenas (PAHR-mee-nas)? I think it’s safe to say that these are not household names for most of us. Even veteran Sunday school teachers might be left scratching there heads over these names. But you—all of us—should know these names! For these six men together with Stephen made up (what I call) the “Magnificent Seven.” In fact, it was only because of these magnificent seven laymen that the New Testament church was able to survive its infancy and eventually spread to the ends of the earth.

When we left off last Sunday, in Acts chapter two, things were going fairly well for the first Christians. Three thousand had been added to their number on the Day of Pentecost. The believers were devoting themselves to the apostles’ teaching and fellowship, to the breaking of bread and the prayers. Everything in the church was new and fresh. They sold their possessions and belongings so that they could care for the poor and needy. Every day the Lord was adding to their number. And for a lot of people—even today—this is the image they have of the early church—where seldom was heard a discouraging word and the skies were not cloudy all day.

But guess what? Even in those idyllic early days of the New Testament, there were problems in the church. That first congregation in Jerusalem was not comprised of perfect people with halos hovering above their heads. Nope, it was made up of people who were frail and fragile, people who were sometimes grumpy and thin-skinned and insecure, people who were quick to assign blame and slow to accept it, people like us—sinners in need of a Savior.

The specific issue that erupted in that first Christian congregation is exactly the kind of issue that eventually erupts in nearly every Christian congregation. This was a congregation that cared for its members—especially the widows who, in those days, had no social security, no Medicare, no Individual Retirement Account from which to live out their senior years. So the church started up a kind of “meals on wheels” program, distributing food to these widows on a daily basis—just the kind of merciful care you would expect from the followers of Jesus.

But then something happened—probably nothing more than an oversight or a failure to communicate, a molehill that quickly got made into a mountain. Somebody’s Greek grandmother apparently didn’t get her fair share of tater tots and Jell-o one Tuesday afternoon. Meanwhile, some other Greek widow apparently got chocolate milk when she had specifically requested regular milk. Coincidence? Some thin-skinned conspiracy theorist apparently didn’t think so. No, this was nothing less than a coordinated effort to deprive the Greek widows so that the Hebrew widows could get more. Phone calls were made, e-mails were exchanged, and before long the entire congregation was engulfed in anger, threats, accusations, reprisals and recriminations.

Full disclosure here: I hope you’ve gathered that I’m embellishing some of the details here. And I’ve done that because, while the details change from congregation to congregation, this basic scenario gets repeated over and over again in congregation after congregation. An innocent mistake, a perceived slight, a misinterpreted comment, a simple oversight—is seized upon by someone, is ramped-up, exaggerated, magnified, and gossiped about. Like gasoline thrown on a tiny flame, a molehill is made into a mountain and the body of Christ suffers.

And this is where the Magnificent Seven rides to the rescue. And the Magnificent Seven specializes in shrinkage—shrinking mountains back down into molehills. The Twelve apostles wisely concluded that their vocation was to preach and teach the Word of God. The fair distribution of tater tots and jell-o was simply not their strong suit. So seven magnificent men were chosen—laymen not so different from any of you—men full of faith and the Holy Spirit who were unafraid to step up and do what needed to be done. They didn’t hesitate to ask, “What needs to be done? What can I do to help? How can we solve this problem? Allow me to handle this for you.”

These seven men were the very first lay leaders of the New Testament. If you’ve ever served on a church board or committee, if you’ve served as an officer or elder, if you’ve taught Sunday school or sung in the choir or helped with the altar guild or organized a Lenten supper or any of the other unsung tasks that someone absolutely has to do—well then, you are an honorary member of the magnificent seven. You are numbered together with Nicanor and Niclolas, Philip, Procorus, Timon, Parmenas, and Stephen. Without your willingness to step up—without your Spirit-led stewardship of money and energy and time—this congregation would quickly grind its way into gridlock. What you do—the sacrifices you make—for the good of our life together here at Our Savior—it matters today and it matters for all eternity.

No one may stand up and applaud for you. No one may even say thank you. No one may long remember how you tactfully defused a brewing conflict—how you always put the best construction on the motives and actions and words of your fellow members. Practically no one will ever know about the generous gifts and offerings you have given to the Lord. In fact, when you step up and make a difference in the church, you’ll probably wind up getting asked to do even more, to take on more responsibility, to attend more meetings and volunteer more hours.

So why bother? You hear that sentiment sometimes from people who’ve gotten burned in the life of a congregation—people who have tried to do the right thing only to have things backfire. These are the walking wounded, the disillusioned, people who distance themselves from the “institutional church” because of all the problems and conflicts. They sometimes float around from church to church, looking for the perfect church, or else they give up all together.

But the Magnificent Seven teach us that there is no perfect church (no perfect apostles, no perfect pastors either); there is only a perfect Savior. There has always been—and there will always be—problems in the church. These magnificent men teach us that you in the pew matter just as much as me in the pulpit. I can’t do it without you; and you can’t do it without a man standing here in vestments, serving you the gifts of life and forgiveness that Jesus Christ has earned for you.

So why bother? Why press on together through thick and thin? Because one day we will see what Stephen saw. You could say that Stephen was the leader of the Magnificent Seven. He too was a layman—not an apostle, not a called and ordained servant. But Stephen knew the Apostles’ doctrine as well as the apostles themselves. And Stephen was unafraid to bear witness to that doctrine about Jesus anywhere, anytime, with anyone. This is what got Stephen into terrible trouble. Time doesn’t allow us to take a detailed look at Stephen’s speech before the Sanhedrin, before they killed him. But the truth for which Stephen was willing to die can be aptly summarized with the words of Jesus from today’s Holy Gospel—that Jesus Christ is the way, the truth and the life—that no one comes to the Father except through Him. He could have watered down His witness, but He didn’t. What Stephen believed about Jesus mattered too much. At his words, the seventy furious men of the Sanhedrin gnashed their teeth and dragged Stephen out of the city and began to stone him. But before he died, this magnificent man said, “Look! I see heaven open and the Son of Man standing at the right hand of God.”

Beloved in the Lord, one day you will see what Stephen saw. You will see heaven open and the Lord Jesus standing at the right hand of God the Father almighty. You will one day take your place in the Father’s house—a place that Jesus Himself has prepared for you by His dying and rising. For you are just like every other member of Christ’s church—frail, fragile, thin-skinned and sinful to the core. But to that list we must also add that you are forgiven of all sin, loved by God, and equipped by Him to be a witness like Stephen—to carry out your vocations and callings in this life with integrity and courage. Incidentally, the Greek word for witness is martyr. Stephen was the first of many martyrs. But as the stones rained down upon him, Stephen could pray with confidence, “Lord Jesus, receive my spirit.”

That same confidence can be yours. For in Jesus your guilt is taken away. Your sin is atoned for. You will live forever with Jesus. Meanwhile, you are not alone. You are a part of the holy Christian church. You are a chosen people, a royal priesthood, a holy nation, a people belonging to God, that you may declare the praises of Him who called you out of darkness into his wonderful light. Through faith in Jesus Christ you stand shoulder to shoulder with Stephen, with Philip, Procorus, Nicanor, Timon, Parmenas and Nicolas. Like them, you are magnificent and more—holy, forgiven and loved. And as a called and ordained servant of the word I just have to say this to all of you laypeople who work and sacrifice and labor and toil to make this congregation so very magnificent: Thank you. Amen.
Posted by Pastor Michael Henrichs at 7:49 AM