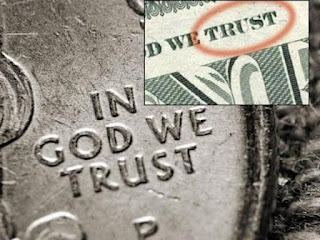 There are photographs of money on the front of today’s bulletin. I have to say, there was a part of me that was uncomfortable with having money so front and center. After all, money is such a worldly thing. It’s an idol for so many. A part of me thought it was just a little crass to feature money so prominently—an intrusion of the secular into this sacred space.

But then it hit me, there’s nothing wrong with money. Money is a good thing. It’s God who gives us our money. The love of money is the root of all evil. Idolatry is evil. Greed is evil. But money itself is a good gift from our good God. Money—viewed rightly and managed wisely—is always a blessing for the Christian, not a curse. In fact, a good chunk of the Bible is devoted precisely to matters of money and finance.

The parable Jesus told in today’s Holy Gospel is a prime example. Nowhere in this parable does Jesus indicate that we should avoid money or that money is evil—quite the opposite, in fact. This parable tells us how we should use money and we should invest money—prudently, wisely, and shrewdly—for the good of our gracious Lord and Master. This parable teaches us that heaven and hell can have a lot more to do with our checkbooks than with our hymn books.

The parable focuses on a manager whose behavior is not all appropriate. This manager’s job was to oversee his master’s money and investments. But as the parable begins, this manager is in deep trouble. Instead of managing his master’s funds wisely, he’s accused of wasting them. He had squandered his master’s money. And when you squander something that isn’t yours to squander, that’s known as stealing. And for that reason this manager got himself fired.

Let me pause here to say he’s lucky he only got fired. You see, this manager had a merciful master. His master fired him, it’s true. But his master could have pressed charges. His master could have prosecuted his manager to the full extent of the law, which would have resulted in a lifetime prison sentence. At the very least, his master could have demanded that the wasteful manager pay back all that he had squandered. But instead, all the master did was fire his dishonest manager. Think of the woman here in Milwaukee who’s been accused of embezzling millions of dollars from the Koss Corporation. I’m sure she would love to trade places with the fellow in today’s parable who only got fired for his misconduct. This manager had a merciful master.

Now, back to the parable, where things start to get interesting. At the very moment when the dishonest manager should have been cleaning out his desk and heading down to Human Resources for an exit interview, he wises up and starts thinking shrewdly. He spins the rolodex and starts calling up everyone who owes his master. He applies a discount to each bill, and he successfully brings in nearly every outstanding debt his master is owed. Chaa-ching. Chaa-ching. Not only that, he makes both himself and his master look good and generous with that discount he applies to each account. At the end of the day, the man’s merciful master commended his manager for this wheeling and dealing because he had acted shrewdly.

Now, the point of all this is NOT that we should go and be just like this manager in every respect. No, he’s clearly got some flaws and failings, and some of his business practices are questionable at best. But, we ARE managers—all of us. God has entrusted each of us to manage a portion of all His wealth. Our money, our possessions, and all we have—all of these things have been entrusted to our management, but only for the short season that we spend in this life.

Clearly one of the reasons Jesus gives us this parable is that we should pause to evaluate our own management of the wealth He has placed into our hands. And let me just say that while there’s more to stewardship than money—while it’s true that God also wants us to manage our time and our talents wisely—yet, God’s Word in this parable focuses clearly on our management of money. The olive oil and the bushels of wheat in the parable were really functioning as a kind of currency—just like dollars and cents.

When money becomes our master, that’s not just a problem—that’s a faith problem. Because Jesus says we can’t serve two masters. We can’t serve both God and money. And by the way, it’s not just a matter of “putting God first” as we so often say. God doesn’t simply want to be first among our many gods; He demands to be our only God—at the center of every part of our lives, including the financial part.

Perhaps the best way to evaluate our faithfulness as God’s managers is to consider the portion of our money that we give back to God—out of love and thankfulness. Let’s be clear right away that when you place a gift in the offering plate, that is first and foremost your gift to the Lord. Period. What it eventually may get used for is ultimately beside the point. And let’s also be clear that God doesn’t view our gifts solely according to the amount we give. It’s the percentage of our income that matters. Two people may each drop a five dollar bill into the offering plate, but that doesn’t tell the whole story. If one of those people is Bill Gates and the other is a six-year-old girl who just received twenty dollars for her birthday, then those “identical” offerings are really not “identical” at all. God asks that, as His managers, we return a percentage of everything back to Him. He also asks that we take that percentage from off the top—or, in the language of the Bible—that we give Him our first fruits.

I have a couple of questions for you as my fellow managers of the Lord. First, do you know what your annual income is? If you filed a tax return in April, then figuring out your total income is relatively easy. Second, do you know what percentage of that annual income you are giving back to the Lord through your offerings? Some of you, I’m sure, do know what percentage of your earnings you give back to the Lord—be it 5%, 10% or 12%. But for every person who knows that percentage, I suspect that there are many others who don’t have the foggiest idea—who simply write out their offering checks based on some criteria pulled out of thin air—or based on whether it’s been a good week or not—or based on whatever seems like a reasonable amount based on the latest economic news—or because that’s just the amount we’ve been giving every Sunday for the past 30 years.

Beloved in the Lord, if that’s how you’re making decisions about the management and stewardship of the money God places into your hands, then learn from the shrewd manager of the parable to crunch the numbers. Do the math! Remember, money itself is a good thing. Christians need to be wise, prudent, thoughtful, and yes, even shrewd and calculating when it comes to money management and the percentage we return to the Lord. Too many of us just don’t take the time or give the attention that we should to these important decisions.

If our gracious and merciful Master were to audit the financial records here at Our Savior, would we be commended for our shrewdness or would we be fired? On the one hand, perhaps we would be commended that nearly 25% of all the offerings received here don’t stay here. Those funds go for missionaries, for seminarians, for the Christian education of children—including children with learning and cognitive disabilities, for pregnant women at “A Place of Refuge” who choose life over the death of abortion for their babies. On the other hand, we’ve taken on a significant debt over the past several years. We agreed to a plan for paying off that debt about a year and half ago. But so far we haven’t really made a dent in that debt. And that debt needs to be dented. Debt that goes unaddressed quickly takes over and powerfully dictates every other decision. It becomes an idol of the worst kind.

You cannot serve both God and money. But today your God is present here in the Divine Service to serve you—to honor you and commend you and remind you that you are His manager. You work for Him. And one day He will welcome you into eternal dwellings. Amen.
Posted by Pastor Michael Henrichs at 1:00 PM